Rio-bound Son wants to prove he has aged well

Rio-bound Son wants to prove he has aged well 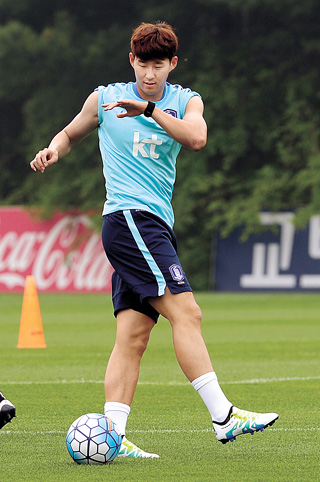 Son Heung-min warms up at the Paju National Football Center. As a wild card, he is determined to help the team into the later stages of the Olympics. [NEWSIS]

Son Heung-min was the youngest player on the national football team when he first went to Brazil in 2014 to play in the World Cup. Now, two years later, he is returning to South America as the eldest of the national team squad for the Summer Olympics.

And unlike the summer of 2014, when Korea couldn’t get past the preliminary stage, Son hopes to take the team well into the later stages of the tournament this summer at Rio.

“I’ve always dreamed of playing in the Olympics,” said Son, who is now playing for Tottenham Hotspur in the English Premier League (EPL). During a fan meeting on May 20 in Seoul, he said, “I performed poorly in the last World Cup but I hope to show a different side of me this summer.”

Although Son will turn 24 years old in July before the Olympics, he will join the squad as a wild card, a system in the Olympics that allows a player to exceed the age rule for the under-23 competition.

Given his status, Son plans to help bring the team together in Rio and he hopes there will be no generational barrier between him and the other players. “I am only one or two years older than the rest of the squad,” said Son. “In the senior team, I converse with older players comfortably.

“There are many brilliant players on the Olympics squad,” he added. “Instead of me leading the team, we need to unite and lead the team together.”

Son says he’s excited to play alongside Ryu Seung-woo, who plays for Arminia Bielefeld on loan from Bayer Leverkusen at the moment. Until last year, before Son joined the Spurs, he and Ryu played together for Leverkusen. But unlike Son, who established himself as a solid starter for Tottenham, Ryu was either a substitute for Leverkusen or was loaned out to other teams.

“I didn’t have much chance to play with Ryu,” Son said. “Ryu and I, we know about each other’s style of play and I am quite thrilled to play with him.” He said he also looks forward to playing with Moon Chang-jin of Pohang Steelers and Kwon Chang-hoon of Suwon Samsung Bluewings.

“Personally, one year went by in the blink of an eye,” said Son who expressed mixed feelings about the first season. “I had a good start but the injury in the middle of the season brought me down a little bit. The competition for a starting position often felt a little too much as well. But I tried to be as much of a help as possible to the team. Although it wasn’t easy to get adjusted to the new league, I had a good year.”

After the season finished, while Son’s performance pleased Korean fans, opinions were divided in England. After he returned to Korea, rumors in London said that Son might be transferred from Tottenham.

The exit rumor obviously is troubling news for Korean fans that have been more than proud to see their compatriot in the top-notch European league. However, Son dismissed the rumor as groundless. “I actually heard the rumor about the transfer through the media. I think there is nothing for me to be worried about.”

Despite the rumor, Son wants to channel his focus on the upcoming friendlies as well as the Olympics.

At the moment, he is training in Paju National Football Center in preparation for the friendlies against Spain and the Czech Republic in early June.