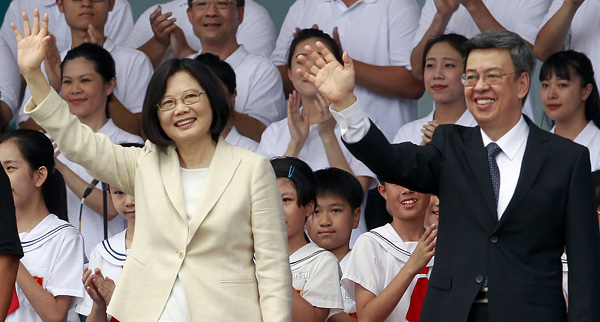 Taiwan President Tsai Ing-wen, left, and Vice President Chen Chien-jen wave during their inauguration ceremonies in Taipei on May 20. [AP/NEWSIS]

TAIPEI — Taiwan is brimming with a new sense of vitality following the inauguration of President Tsai Ing-wen on May 20.

Not only is Tsai the first woman to be elected to run a country in the Chinese-speaking world, her pro-independence Democratic Progressive Party (DPP) is coming back to govern after an eight-year rule by the mainland-supported administration of President Ma Ying-jeou from the conservative Kuomintang or Nationalist party.

Tsai, a former university law professor, is starting her work by asking the U.S. for participation in the second round of negotiations for the Trans-Pacific Partnership (TPP) agreement. At the same time, her prime minister has ordered all criminal charges against some 120 university students accused of storming and illegally occupying government buildings two years ago — in protest of Ma’s mainland policies — to be dropped.

Underneath this sense of new beginnings, however, lurks the perennial worry about cross-strait relations. Taiwan and China are separated by a channel as narrow as 81 miles at the closest point. And China has hundreds of missiles pointed at Taiwan, an unsubtle warning against any explicit call for independence.

So that nobody underestimates China’s warning, China cut the number of tourists coming to the island within days of Tsai’s inauguration. They have dropped by a third. Beijing also abruptly stopped imports of agricultural and fishery products for the first time in eight years, when such trading began. “You might call this soft sanctions,” Dr. Roy Chun Lee, deputy executive director of Taiwan’s World Trade Organization Center, comments wryly. China has even cancelled participation in a joint calligraphy exhibition with Taiwan.

All this is punishment for Tsai’s refusal to endorse in her inaugural speech the so-called 1992 Consensus under which China and Taiwan agreed to carry on trade and other commercial exchanges on condition that they recognized the One China Principle — with both sides free to interpret what that meant exactly.

Tsai now insists on modification of that formula. In her inaugural address, she said she accepted the “fact” of the 1992 “meeting” between the two sides to promote peace and dialogue, but refuses to acknowledge it was a “consensus.”

That doesn’t mean she wants to declare independence or separation of the island. She only wants to confirm the status quo. The DPP government remains committed to continuing the process of peaceful dialogue and contacts, but her future relations will be conducted on the basis of the Republic of China constitution and accompanying laws that recognize the existence of “two (separate) areas.” In other words, she accepts the idea of One China and that means Taiwan. But she also represents one of the two areas as defined under Taiwan’s constitution.

To China, that amounted to a semantic game, signifying a potential for creeping independence. It’s in no doubt as to what the majority of Taiwanese want. In a recent opinion survey by the official Taiwan Thinktank, more than 54% of people polled said they opposed China’s version of the One China principle.

According to some analysts, this feeling against Chinese identity has risen following Beijing’s interference in Hong Kong’s affairs. Reports of Chinese police illegally abducting Hong Kong publishers and Beijing’s attempt to muzzle the Hong Kong press have alarmed the Taiwanese. “They want no part of a ‘one country, two systems’ solution for Taiwan,” says Rick Chu, a National Chengchi University’s political science professor.

Against that backdrop, Beijing is running out of breath issuing daily warnings of the fate that could befall Taiwan unless it unambiguously identifies itself with China’s sovereignty.

Speaking to a delegation to the National People’s Congress, China’s parliament, in March, President Xi Jinping took a categorical stance on the issue, declaring that unless Taiwan abandoned the aspiration for independence, it could “lose the magic compass that calms the sea” across the Taiwan Strait and the “ship of peaceful development the two sides have had will meet with great waves and even suffer total loss.”

It was a thinly veiled threat to use force unless the Tsai administration clearly adhered to the 1992 “consensus.” “We will resolutely contain the separatist path of any form of Taiwan independence, protect state sovereignty and territorial integrity, and absolutely not allow a repetition of the historical tragedy of national separation,” Xi said.

In short, Xi has imposed on himself the mission of reunifying China by making Taiwan the last piece of territory to be recovered from the shameful history of foreign conquest and colonization. Taiwan was ceded to Japan by the Qing Dynasty in 1895 under the Shimonoseki Treaty, and reverted back to China only in 1949 when Chiang Kai-shek’s Nationalist forces moved to the island following its defeat in China’s civil war. On the eve of her inauguration, Li Yihu, head of Peking University’s Taiwan Institute, said “[Tsai] has to answer whether she endorses the 1992 Consensus; it’s not an optional question. The new leader has to voice a clear position on this issue.”

But recent geopolitical conditions are not unfavorable for Taiwan to accentuate its own identity. On top of its domestic challenges including economic slowdowns and political instability, China is facing region-wide tensions over its sweeping territorial claims in the South China and East Seas. China’s construction of artificial islands and marine military installations have alarmed Vietnam and the Philippines to the extent that they are welcoming the return of a U.S. naval presence in the region.

From diplomatic confrontation with Japan over the Senkaku/Diaoyu island ownership to sea-born clashes with patrol vessels from Vietnam and the Philippines, China’s territorial claims are moving increasingly into the stage of armed confrontation. Taiwan is close to the area of tensions and it could use this restive period to pursue its own national identity.

There’s no illusion in Taiwan as to the risks involved in testing China’s intentions, as the U.S. has a clear policy of not encouraging Taiwan to opt for independence. The U.S. recognizes there’s only one China and that Taiwan belongs to that China. With the inauguration of the Tsai government, the U.S. has served notice that it should not do anything that could derail that policy. But the U.S. is committed to defending the island in case China uses force to conquer it.

As for Taiwan itself, it is far from ready to accept Beijing’s rule. Beijing keeps pushing the One China slogan. But the plain fact is that Taiwan has evolved so far apart from China that “it has nothing in common,” says Antonio Chiang, a prominent journalist who will shortly join the government as a think tank advisor.

Taiwan’s vibrant democratic process and open system of government is evident in the size of the support the 59-year-old Tsai, a former university law professor and a Taiwan native, received in the January elections for president and the Legislative Yuan, the island’s top legislature. While she received over 56% of the popular votes, her pro-independence DPP took a comfortable majority of 68 seats in the 113-member legislature. It was a clear mandate for a party espousing a status quo, not attached to China.

Tsai is expected to tread carefully in her dealings with China. Although she emphasizes her commitment to Taiwan’s constitution, which legitimizes a “Two Area” concept, she will avoid provocatively asserting the island’s independence, and she hopes to make it clear that she has a different mandate as the leader of another part of China. “She’s trying to make her position predictable, trying not to spring any surprise on the nervous leadership in Beijing. President Tsai hopes to build on trust with Beijing based on common sense,” says journalist Chiang.

An important item on Tsai’s domestic agenda is to heal wounds inflicted by the KMT’s long rule of the island, especially during the period of emergency rule. They include not only recovering state assets seized and taken over by the KMT from the Japanese colonial government at the end of World War II, but properties and lands taken peremptorily from native Taiwanese farmers and businessmen. Much of these were used by the ruling party for political purposes and, according to Dr. Lai I-chung of Taiwan Thinktank, they were valued at NT$900 billion at the last calculation in 1990. “What had been illegally seized should be returned to their rightful owner,” Lai says. Other issues included in the category of what Tsai termed as “transitional justice” includes getting at the truth of victims who suffered for political reasons during the period of “White Terror,” such as the killing of thousands of Taiwanese protesters by KMT troops in 1947.

Other parts of her domestic agenda are looking for a new market outside China to revitalize the Taiwan economy, and reforming the island’s archaic legal and educational institutions. Hand in hand with this agenda is consolidation of what her policy advisers describe as “establishing the constitutional order,” meaning further developing the island’s democratic institutions.

In doing so, Tsai has to walk cautiously. She must not alarm China into concluding that she is heading for independence in the foreseeable future. Her challenge is to keep China engaged with dialogue while making it clear that she stands for separate values and a separate system. To do so, her past experiences as a top trade negotiator for Taiwan will be sorely needed and tested.

This was originally published in the Asia Times.


*The author served as Seoul bureau chief of the Hong Kong-based Far Eastern Economic Review. He was also the Review’s Taipei bureau chief.