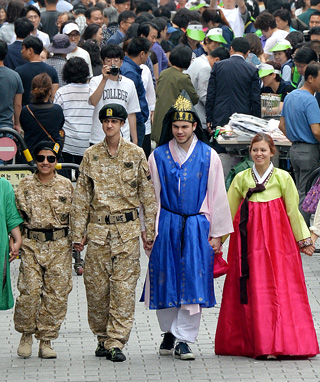 Foreigners in uniforms that appeared in the hit drama “The Descendants of the Sun” and in hanbok, traditional Korean attire, walk on the street in front of Namdaemun Market in central Seoul on Thursday. Seoul’s Jung District hosted a “Namdaemun Market Global Festival” to attract more foreign tourists to its district. [NEWSIS]