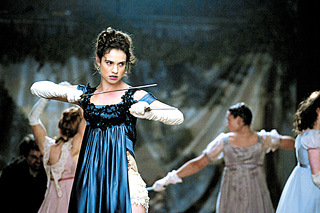 Pride and Prejudice and Zombies (15)

In 19th-century England, zombies are attacking the town where the Bennet family is living. Father wants his five daughters to survive so he sends them away to China to learn martial arts. Their mother has only one wish: She wants her daughters to be well off by marrying wealthy suitors.

Then the Bingley family moves to town and throws a glamorous party. While they are enjoying their time, zombies attack suddenly. Mr. Darcy, played by Sam Riley, and Elizabeth Bennet, played by Lily James, fight them. They need to closely examine the continuing threat from zombies in order to find out exactly what is happening to the town.

The film is based on the novel of the same name written by Seth Grahame-Smith.

He parodied the book written by Jane Austen, “Pride and Prejudice,” in 1813. The classic has several times been adapted into TV series and movies. The zombie version follows the general story line of the original novel, but with added excitement.

Thriller master Na Hong-jin once again brings the killings and the gore in his latest project, “The Wailing,” also known as “Gokseong” in Korea.

But this time, the acclaimed filmmaker takes the perspective of the victims instead of emphasizing the pursuit of the killer, as he did in his most well-known work, “The Chaser” (2008).

In the isolated mountain village of Gokseong, a mysterious series of killings begin to happen for an unknown reason. The assailants are covered with rashes and show irrational behavior as if they are possessed by demons.

Some say it is because of poisonous mushrooms, but no vegetable could cause this much damage.

Village police officer Jong-gu starts to track down the perpetrator once his one and only daughter falls victim to the mysterious symptoms.

He chases after a Japanese man living deep inside the village, after hearing rumors that he is a ghost that came to wipe out the village.

In the process, Jong-gu invites a famous shaman (Hwang Jung-min) to drive out whatever is controlling his daughter, but it seems that the shaman is not powerful enough to stop the evil force.

As Na tries to show the randomness of how murder victims are chosen, the spine-chilling “The Wailing” encompasses elements of Christianity, Shamanism and even Exorcism. 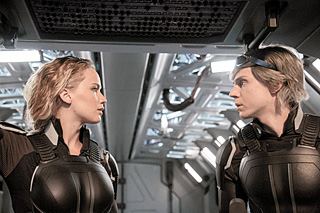 Many famous superhero films that are competing to be released in Korean theaters this year.

Starting with “Batman v Superman: Dawn of Justice” and “Captain America: Civil War,” now the popular “X-Men” series is back after the last installment, “X-Men: Days of Future Past” (2014).

An ancient cyber-mutant named Apocalypse, or En Sabah Nur (Oscar Isaac), has risen from a long sleep in Egypt. He sees the corrupt civilization and gathers the Four Horsemen so they can rebuild the world.

Professor X, or Charles Xavier (James McAvoy), and his comrades must fight the evil forces in order to save the world. Xavier wants the peaceful world where both mutants and humans can live together.

Thus, he and Mystique, or Raven Darkholme (Jennifer Lawrence), form the X-Men.

In this film, once again, the character of Quicksilver (Evan Peters) is outstanding. Director Bryan Singer noted that it took a month and a half to film his scene.

The action scenes and intricate costumes for each character stand out especially, showing that “Apocalypse” has been a long time in the making. 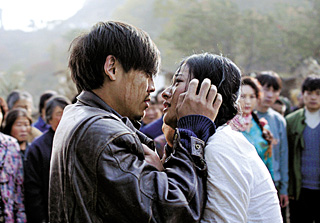 The story is set in a remote village deep in the mountains. A man who recently moved to the village steps on a small explosive that was meant to trap wild animals.

Wang Ziyi (Han Chong) is blamed for the death of the man and becomes responsible for taking care of his widow, Hong Xia (Lang Yueting), who is mute. As their intimacy grows, the conflict between the townspeople and Hong intensifies as well. Moreover, Hong has a hidden story that changes the atmosphere entirely.

Director Larry Yang wanted to focus on communication and emotional development between people.

The film is also being noted for its director of photography, Patrick Murguia, who is well-known for shooting sensual scenes in such films as “Brooklyn’s Finest” (2009).

The location of the film is the Taihang Mountains, which span the Shanxi, Henan and Hebei provinces.

As Yang chose the isolated village, the actors and staff had difficulty climbing up and down the steep hills to shoot. But these trials paid off in beautiful scenery.

It has been selected as the closing film for the 2015 Busan International Film Festival.

Tony, played by Emmanuelle Bercot, broke her leg in a skiing accident. She is recovering in rehab. The memory of her love that once was so passionate and vigorous is not easily erased.

Georgio, played by Vincent Cassel, meets Tony in a club and they fall in love. They get married, but their life starts to fall apart. To make matters worse, her brother, Solal (Louis Garrel), is getting suspicious of Georgio’s background.

How will they continue their relationship?

The film is filled with flashbacks that allow viewers to understand the development of the characters’ emotions in depth.

Thus, when Tony recollects her days with Georgio, viewers can experience the pain she is undergoing as her life changes. Not surprisingly, Bercot won the Best Actress award at the 2015 Cannes Film Festival.

The title of the film means “my king,” which refers to Georgio, who will always be Tony’s king and lover.

However, the film does not portray love as an unconditional state, which is after all, draining the life of Tony. 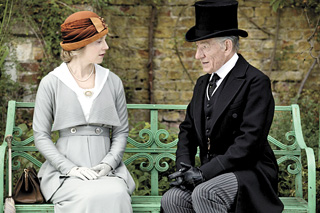 But this time, he is an old man whose memory is deteriorating slowly.

However, his skill of getting to the bottom of cases and finding the truth has not been lost yet.

It is 1947. Watson is dead, as is Professor Moriarty. Sherlock Holmes (Ian McKellen) is 93, living with housekeeper Mrs. Munro (Laura Linney) and her son Roger (Milo Parker). As he has been retired for a long time after getting his final case, Holmes plays with young Roger, telling him detective stories from his own experience. He realizes that he has difficulty holding on to his memories of the past. He begins to organize the cases he has worked on.

Then, his final case from 30 years ago gradually begins to reemerge. The case was left unsolved, which still haunts him. Holmes remembers a woman named Ann (Hattie Morahan). This will be the final case of his life as Sherlock Holmes.

The film is based on the novel “A Slight Trick of the Mind” (2005), written by Mitch Cullin.

The way Holmes reconstruct his past in the film differs from that of the novel, with delicate usage of flashbacks to track the case step by step.