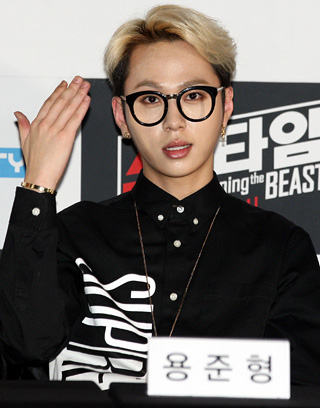 Cube Entertainment, the talent agency of the five-member boy group, said on Thursday that Yong has written and composed a theme song for the Chinese TV show that is similar to the Korean TV audition show “Produce 101,” on which 101 female trainees from various local entertainment agencies competed with each other to earn a spot on a project girl group.

The Korean TV audition show spotlighted trainees practicing “Pick Me,” the main theme song of the show, throughout its run, and the song with its addictive lyrics has become one of the most successful songs in Korea in the first half of this year.

The Chinese TV show will reportedly have participants across the mainland and singer hopefuls practice the theme song created by Yong.

Yong also uploaded a post to his Weibo account on Thursday saying, “It was so much fun to be part of the show by working on the song.”

Yong began his professional singing career as the main rapper of the Beast in 2009.

Beast is working on their next album, which is slated to hit online and offline music stores sometime this summer.