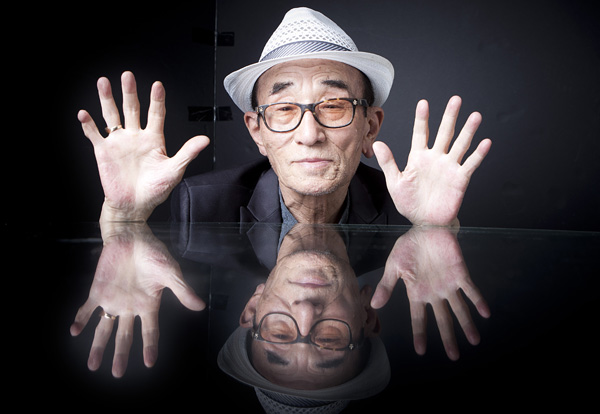 He was adored by former President Park Chung Hee, as well as successors like Chun Doo Hwan and Roh Tae-woo. While they were in office, Shim was always present at official events organized by the Blue House, playing his accordion — his No. 1 treasure.

In the early 1980s, he invested most of his savings and bought himself a brand new accordion for about 3.3 million won, which is said to equal around 25 million won ($21,000) today. For the past 35 years, Shim says the accordion allowed him to get close to the public, accompanying countless artists ranging from Cho Yong-pil and Lee Mi-ja to Lee Seung-chul and Shin Seung-hoon. But it only took a few minutes, Shim recalled, for a fierce fire that broke out last month at his home to devour his 35-year-old companion.

It was around midnight on April 11 when a discarded cigarette in an ashtray started a fire in his small home in Gunja-dong in Gwangjin District, eastern Seoul. As soon as he saw the flames, Shim says he couldn’t think of anything but running to knock on the doors of his neighbors. One of his neighbors is an old grandmother who can’t move very fast. Luckily, a fire truck showed up soon enough to put out the fire before it reduced their homes to ashes. But unfortunately, Shim lost his accordion.

“My face burns in shame to talk about it,” Shim said. “I can’t believe a discarded cigarette in a dry ashtray would start a fire like that … I’m a crazy man. I call myself a musician who’s been performing for over 60 years, yet I couldn’t even think straight enough to escape with my instrument. If my children made such a mistake, I would be cursing at them saying they are out of their minds.”

When the JoongAng Ilbo met Shim last week for an interview, he was still full of guilt and regret. The accordion he had left inside his burning home was a 30-kilogram (66-pound), Italian-made Super Paolo Soprani. With the accordion, Shim produced 7,000 songs that are listed by the Federation of Korean Music Performers as copyrighted and produced about 1,000 albums.

“When I was young, I could play it standing up,” said Shim. “But now, I can’t handle its weight unless I’m sitting down.”

But the sudden loss of his musical instrument put him in a tight spot for the concert that was planned on April 30 at Ehwa Womans University in Seoul. Choi Sung-chul, director of the production company Paper Records, which organized the Right Now Music concert, managed to help Shim rent out a similar accordion at the last minute.

After the show, young artists and Choi sat down with Shim and decided to help the musician, and set up a crowdfunding campaign on Tumblbug (tumblbug.com/shimsungrak) to purchase a new accordion, which costs nearly 25 million won.

Shim says he was lost for words when these young friends decided to help him in such a way.

“I’m just so sorry for bringing everyone into this mess I’ve created,” he said. “I am not too comfortable having to owe so many people with a burden they should not carry.”

But the young musicians say it’s the least they can do for Shim, one of the most legendary musicians in Korea’s pop music scene for the past 60 years, despite having a handicap.

Shim, who lost part of the little finger on his right hand in an accident when he was a young boy, began playing the accordion when he was in high school. After endless practicing, he managed to find a way to play the keyboard with only four fingers.

But Shim’s four fingers move smoothly across the keyboard without any problem. Since he finds his own way of playing the notes, he does not look at the music while playing.

“I memorize it in my head and play it by heart.”

In 2009, Shim released the album “Listen to the Songs of the Wind” and won the Special Award at the Korean Music Awards the following year. Usually, Shim plays in a recording studio or accompanying singers. But at that awards ceremony, he performed solo, right under the spotlight.

“Some say I only work in the shadows where people can’t see me,” Shim said. “But I don’t think like that. I especially enjoyed my time in the recording studios, and I believe that’s my sunny spot.”

As of Thursday, about 14.3 million won has been raised for the campaign. There’s still a long way to go, but Shim says he believes that, as the saying “Penny and penny laid up will be many” goes, he’ll soon have a new accordion thanks to music lovers across Korea, and he’ll thank every one of them at a special concert on July 14.

On the belt of his new accordion, Shim says he will stitch the name of each donor, and will give them each a limited-edition LP of his best songs.