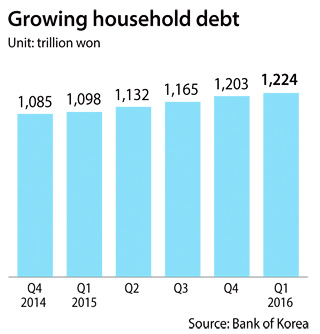 The growth of Korea’s household debt was finally contained by the financial authority through tightened guidelines for new loans and mortgages.

According to the Bank of Korea Thursday, the country’s aggregate household debt stood at 1,223 trillion won as of the first quarter of this year, up 1.7 percent from the previous quarter.

The growth slowed from a 3.3 percent increase in the fourth quarter of last year.

The slower growth was attributed to stricter guidelines on lenders issuing new loans or mortgages that were implemented in February.

Of the total, loans borrowed from those institutions accounted for 1,158 trillion won. Those loans rose 1.8 percent from the fourth quarter.

Mortgages issued by commercial banks grew 5.4 trillion won or 1.3 percent to 407.1 trillion won as of March. The growth was nearly halved from an 18 trillion won surge in the fourth quarter of last year.

The plan was announced late last year amid growing criticism that the government encouraged the people to buy residences with loans to revive the flagging housing market and boost domestic consumption - at the risk of their financial well-being.

The stricter credit review system examined borrowers’ financial strengths more closely and forced banks to be more careful about the loans they extend. Banks were told to recommend borrowers repay interest and principal simultaneously from the beginning, considering that some loans in Korea only ask for interest payments for up to 10 years.

According to the FSC guidelines, all new mortgages are being issued in the form of amortized loans, which require principal payments from the start. Grace periods of a maximum of one year on principal payments are afforded to some borrowers, but only to those with financial difficulties.

“The FSC will continue managing the nation’s household debt growth in a steady manner, preventing it from posing threats to the economy and financial system,” the FSC said in a press release. “From now on, we will accelerate improving the quality of mortgages.”

“The FSC will manage the rising debt in the secondary financial market more aggressively, preventing a balloon effect,” the FSC said.