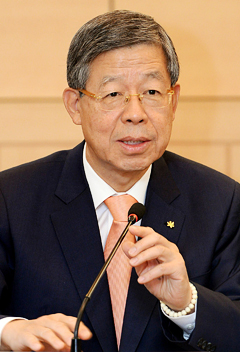 The Saenuri Party named Kim Hee-ok, former chairman of the Government Public Ethics Committee, as its interim leader on Thursday in order to reinvent itself after the crushing general election defeat in April.

Kim will act as the interim chairman until the party elects a new leader at a national party convention.

Spoiled by years of factional schism, the conservative party, which won 152 out of 300 seats in the National Assembly in 2012, lost its majority in the April election and was reduced to being the second-largest party in the upcoming legislature.

Despite the humiliating defeat, intra-party fights continued, until factional bosses Kim Moo-sung and Choi Kyung-hwan, and the newly elected floor leader, Chung Jin-suk, reached a ceasefire deal earlier this week and agreed to name a reformist to oversee the party until the convention.

“I will do my best to wholly overhaul the Saenuri Party,” Kim said while accepting his appointment at a press conference on Thursday.

“If there were reactionary practices, they must be shattered. If the goal is just, we must use all measures to reform and innovate.”

He passed the bar exam in 1976 and worked as a prosecutor. Upon ending his career with the government as the vice justice minister in 2006, he was named a justice of the Constitutional Court.

He made a rare move in 2010 by accepting Dongguk University’s request to serve as its president before completing his tenure at the highest court. From February 2014, Kim served as the chairman of the Government Public Ethics Committee.