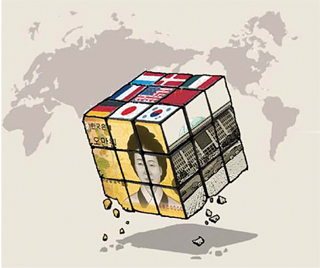 A global recession should not be a surprise. Global GDP per capita passed the $10,000 threshold in 2011, putting the world economy at risk of falling into the middle-income trap. When an economy reaches the $10,000 income threshold, growth stagnates. Once mired in the trap, it will take some time for the global economy to gain the impetus to pull out of stagnation and pick up speed.

The Korean economy went through the same phase starting in 1995, when it hit the threshold. Before that, the economy grew at an average pace of 7.1 percent annually for seven years leading up to 1995. But after that, the run slowed to 3.6 percent on average for the following seven years.

There are many alarming concerns about the Korean economy. But the danger has been overstated. It is true the economy has been underperforming compared to its growth potential of 3 percent since 2012. This year, the economy is also moving at the snail’s pace of the 2 percent range. But in the global context, it has done pretty well. Last year, the economy grew 2.6 percent year on year. This was third-highest growth among countries with per capita income of over $20,000. Exports sank 8 percent year on year, but Korea’s trade rank moved up to sixth on the global scale.

But the problem is that from now on, prospects are likely to worsen. We may one day envy the days when the economy was able to grow 2 percent. The country, with its structural and demographic similarities to Japan, is paranoid about ending up like its neighbor. On the demographic front, Korea is exactly where Japan was two decades ago. The way the country is run is also modeled after Japan. Korea Inc. was modeled after Japan Inc.

Japan did not sit entirely idle when it faced various challenges and dangers. It tried everything in the books to fight stagnation, recession and deflation. Along with immediate actions like monetary and fiscal expansion, it carried out long-term structural reform, deregulation and reforms in labor, finance and education.

Yet it failed to see through structural reform. Michio Morishima, a Japanese economist who has frequently been mentioned as a candidate for the Nobel Prize, believes the Japanese economy crumbled because of a breakdown in politics. Economic policy can only succeed through political leadership, and he argues the lack of that crucial factor brought about the economic crisis of the late 1990s. In his 1999 book “Why Will Japan Collapse?” he proclaimed that Japan has a first-rate economy but third-rate political system.

Prof. Chang Dal-joong of Seoul National University also reached the same conclusion in his 2003 book on Japan, attributing Japan’s lost decade to a loss of leadership. The country’s system required rebuilding, but there was no political leadership to push through the agenda.

Japanese politics in the 1990s was chaotic. After the Liberal Democratic Party, which dominated postwar Japan, lost power in the early 1990s, the country was run by coalition governments that lacked influence over the all-powerful bureaucratic group. Politicians were entirely engrossed in the power struggle. The drive for reform, which was needed to rebuild a collapsed economy after the bubble burst, faltered and lost direction amid the shift in political dynamics.

Structural reform is essential to keeping up productivity, which secures future growth. GDP is composed of labor, capital and output. We no longer can expect contributions from the labor front since the working population will start to thin from next year.

The state-run Korea Development Institute believes the labor factor would only undermine growth five years from now. When the working population decreases, so does capital. Capital contributions to the economy will also fall. Productivity will remain the sole driver for growth.

Korea’s productivity has a lot room to grow. It is just half of the U.S. standard and lags far behind Japan and the average of OECD member countries. If reforms succeed, the local economy has the potential to run at 2 percent to 3 percent, debunking the Japanization theory.

As we can see from Japan, strong leadership is crucial to achieving reforms. Reforms can trigger conflicts among different classes and generations. Those with vested interests will strongly oppose it. Thus, public support through persuasion is necessary to see through reforms. Leadership to carry out the reforms at the right time is also required. Tokyo failed in its reforms because it lacked such leadership.
So far, we, too, see little of the leadership that can initiate and carry out reforms. Politicians are busy trying to win favor from the unions that are subject to reforms, which are bound to fail as a result. We are doing exactly what Japan did in the early 2000s. Politicians talk heatedly of reforms, but what they do disrupts that mission. We doubt that we can rely on them to pursue restructuring to shift human and capital resources to new industries.

If the industry cannot be restructured, other reforms — regulations, labor, pension and education — are all likely to fail as they pose bigger challenges. From what we have seen so far, the work — structural reform to hone productivity — cannot be assured.

We are headed where Japan has been. We just hope we are luckier and blessed with politicians who can muster wisdom and bipartisanship for the national interest. If politicians do their job, we can avoid the pitfall of a recession.


*The author, a former editorial writer at the JoongAng Ilbo, is an adviser at the Korea Institute of Finance.