Return of the Unfortunate Prince

Return of the Unfortunate Prince 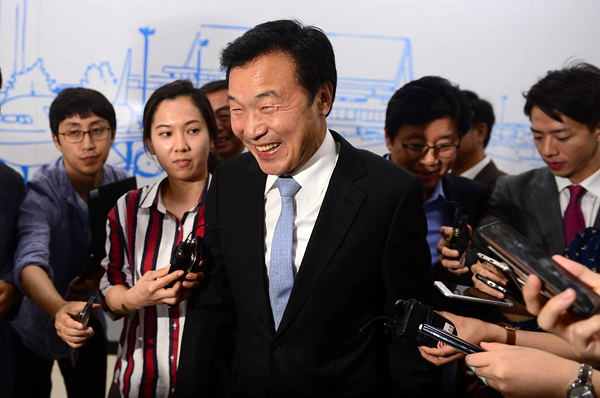 He returned to Seoul after 102 days. As he arrived at Seoul Station, former Gyeonggi Gov. Sohn Hak-gyu shouted, “Today is not the end. This is the beginning of another journey into the sea of people.” The 100-day grand tour was his way of competing against Lee Myung-bak and Park Geun-hye in the Grand National Party’s presidential primary.

Sohn said he would find solutions in the field. He traveled 12,475 kilometers (7,751 miles) by bus, taxi and on foot. He experienced 93 jobs, including baking, mining, farming, welding and forklift operating. His aides thought the day he returned to Seoul would be the day the tables would turn.

But neither television news nor the front pages of daily newspapers reported his whereabouts. Before he arrived at Seoul Station, North Korea conducted its first nuclear experiment. While nuclear fear swept the Korean Peninsula, Sohn’s arrival was not comparable in news value.

“I thought Sohn would be greatly disappointed after 100 days of challenges if no reporter was waiting for him,” recalled his publicity adviser. “I called newspapers and asked them to send reporters, even if they wouldn’t write about him.”

This is not the only incident that earned him the nickname of “Unfortunate Prince.” He is considered to have received little recognition for his competence, and he never got the right opportunity, despite his outstanding qualities. Compared to Seoul, residents in the province of Gyeonggi lack a sense of unity, and the post of Gyeonggi governor is not very influential, no matter how well he serves. Some say it is the curse of the Gyeonggi governor.

A political career cannot be evaluated by whether a politician earns the party nomination as presidential candidate or is elected president. But in 2007 and 2012, the voters and party members did not choose him.

His “new political order” has never been completed. Sohn’s political potential never blossomed, but is misfortune or a lack of opportunity to blame?

Since Sohn retired from politics, he has been residing in Gangjin County, South Jeolla. But recently, he suggested he may return and “lead the establishment of a new order.” His comeback should be a result of more productive contemplation than his withdrawal from the Grand National Party.

Sohn also needs to explain why he retired one year and nine months ago, and explain why he wants to return now. He should tell us why the hero of the new order should be Sohn Hak-gyu and what has changed since he left.


*The author is the political news editor of JoongAng Sunday.