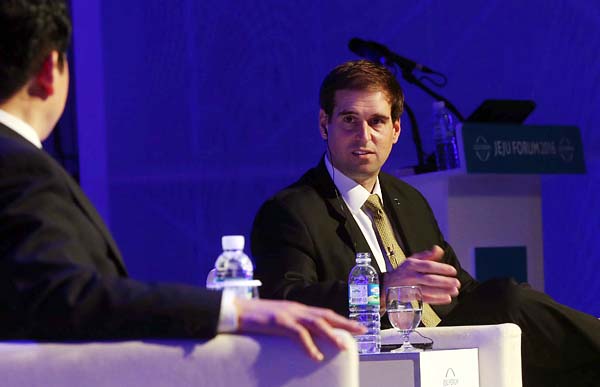 J.B. Straubel, chief technology officer and co-founder of Tesla Motors, right, speaks on the revolutions that electric vehicles will make in the future on stage with Jeju Gov. Won Hee-ryong at the Jeju Forum for Peace and Prosperity on Friday. [KIM SANG-SEON]

SEOGWIPO, Jeju - J.B. Straubel, chief technology officer and co-founder of U.S. electric car manufacturer Tesla Motors, called Jeju Island’s initiative to be carbon-free by 2030 “a compelling vision” and the “same direction in which the world needs to head” while speaking at a forum on the resort island on Friday.

“I think there’s massive potential in this type of vision,” Straubel said at the 11th Jeju Forum for Peace and Prosperity at Seogwipo, on the scenic island that is also a Unesco World Heritage site. “This is going to be a massive area of growth for many different countries and many different products all around the world. And starting here could be a good way to do that.”

Straubel and Jeju Gov. Won Hee-ryong discussed the expanding electric vehicles (EV) industry during a special session of the forum titled “Revolutionary Changes EVs will Bring to Our Lives.”

Won shared Jeju’s plans to change every car on the island to an EV by 2030 as part of its “carbon-free island” initiative.

“We definitely think that is the right direction. You understood how to link this together in a very intelligent way,” said Straubel, who pointed out some “put focus on one type of problem and not the whole picture.”

“This is a neat case - it can be a testbed that offers examples on a scale that can show the rest of the country and the world how to be more aggressive,” he added.

“We started in 2003 with just five employees,” he said, reflecting back on the rapid growth of the California-based electric car company. Five years later, the first-generation 2008 Tesla Roadster, an EV sports car, was introduced. Model X, an electric SUV, was revealed last year, and Telsa is currently working on its third-generation vehicle, the Model 3 sedan, which has already received 400,000 preorders.

Straubel cited the enormous development in battery technology, a vision to make EVs affordable and the launching of convenient supercharger networks across the United States and the world for the rising popularity of Tesla’s electric cars. He said it also reflected the public’s desire to live a carbon-free lifestyle.

On this note, Straubel pointed to the trend of global temperatures rising at a “phenomenal scale,” adding that “2016 is the hottest year on record so far.”

He remained mum on Tesla’s cooperation with Korean companies on future capabilities but said, “We work with suppliers around the world for different car parts. Certainly there are excellent suppliers in Korea.

“When we started with the Roadster and the Model S, it was hard to get the best suppliers. Now, it is completely the opposite,” he added. “All the best suppliers from Korea, Japan and Europe are coming to us and asking us how they can participate. They see the exciting growth that is going to happen with electric vehicles. They have the same vision for their future businesses, and they want to participate in EV growth as well.”

As to the lack of supercharger stations for EVs in Korea, he said there was room for joint development.

“In Korea, there is already a fairly big electric vehicle infrastructure,” he said. “Before any successful entry, it will be important to have a charging infrastructure in place, in combination with our own network and superchargers, as well as managing public networks that exist. That is the ultimate strategy.”