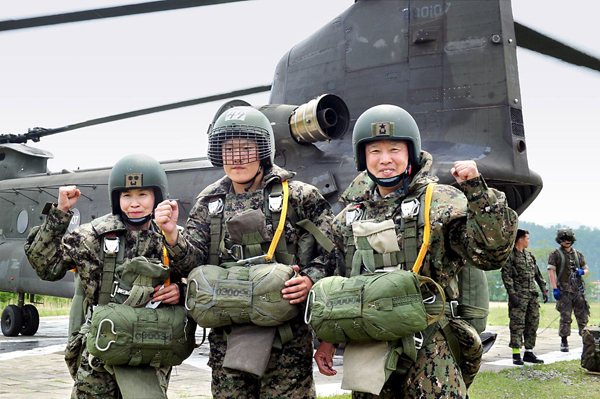 From the left, Brig. Gen. Yoo Hae-il, the father, Lt. Col. Hong Young-mi, the mother and soldier Yoo Jun-hyuk, the son, jointly took part in a parachute landing fall training on May 23. The entire family flew 600 meters above ground in a helicopter. This is the first time in Korean military where an entire family jointly participated in a parachute training. [REPUBLIC OF KOREA ARMY]

Inside a Boeing CH-47 Chinook helicopter, the jumpmaster claps his hands and holds up six fingers to indicate six minutes are remaining. The soldiers start removing safety pins from their parachutes, their hands trembling slightly. Five minutes later, the blue light on corner of the wall turns red and the loading ramp opens as the soldiers form and prepare to leap into the blue.

On May 23, about 20 soldiers at the Army’s Special Forces training center flew in the helicopter to practice parachute landing training. A helmet with one star, given to brigadier generals, and one with two hibiscuses, given to lieutenant colonels, stood out among the many numbered helmets worn by recruits. The person wearing the star helmet was Brig. Gen. Yoo Hae-il, 53, and the person wearing the hibiscus helmet was his wife, Lt. Col. Hong Young-mi, 52. The married couple joined their son, Yoo Jun-hyuk, during his parachute landing training.

“Next month I will be ending 30 years of service in the military,” said Hong, who has worked for the Defense Institute for Spiritual Force. “I wanted to do something meaningful before my discharge, so the family decided to do parachute landing training together.”

There have been instances in the Korean military where a father and a son participated in parachute landing training together, but never has a mother also taken part. Hong was in her forties when she first participated in parachute landing training alongside her juniors, who were in their twenties, while serving in the Special Warfare Command. According to Hong, she first suggested that her husband join the family parachute training.

“I decided to organize the parachute training since my son serves in the Special Forces,” said Hong with a look of pride. “That’s why we set the date for May 23, when our son’s military camp has parachute training.”

Before going to the military, Yoo, the son, weighed over 100 kilograms (220 pounds). In last year’s physical examination, despite Yoo’s body being graded level three, making him eligible to serve in the army, Yoo still wasn’t able to apply to the Special Forces.

Yoo has, since then, lost 20 kilograms through exercise and strict dietary control, and was graded level two in another physical examination in 2016. In April he joined the 707th Special Mission Battalion, one of Korea’s Special Forces units.

The family members jumped from the helicopter while carefully following the jumpmaster’s instruction. They all landed safely on the target spot, and after the successful completion of their training, Yoo said with a smile, “I’m really happy my parents joined me in my first parachute training.”