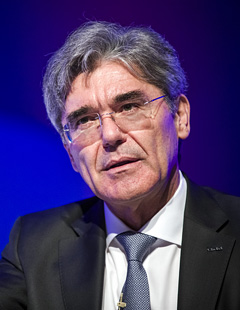 SEOGWIPO, Jeju - Joe Kaeser, president and CEO of Siemens AG, drew upon the German experience as he declared that the reunification of the Korean Peninsula will be “absolutely worth it” despite the cost and difficulties in the process, as he spoke at the Jeju Forum for Peace and Prosperity on Friday.

“I know the road to reunification can be long, it can be winding, and it can be uncertain,” said Kaeser during a special session on “A Unified Korea Finds Its Future in Business Enterprise” at the 11th Jeju Forum held at the International Convention Center Jeju in Seogwipo.

“It took Germany over 40 years to get it done, and it took most of Germany by surprise when it happened. But when it happened, it happened really fast,” referring to the opening of the Berlin Wall ending the division of East and West Germany.

Kaeser - who has spent 36 years with the Germany-based Siemens, a global engineering and electronics company founded in 1847, with branches in some 200 countries - weighed in on the role of government, people and enterprises in the integration of his country. “Reunion has been a tough exercise and it was expensive. But we never lost sight of our destination nor our destiny.”

He said that other key players in the region had not been keen on a reunified Germany. “It was not that simple to win over the United Kingdom and France because they knew the reunification of Germany would create an economic superpower in the middle of Europe,” and also because of the country’s past history of world wars.

“The real hard work was yet to come,” he added. “Everybody had to chip in.”

He added that a solidarity tax was paid by Germans in the west to build up the east German economy, while large enterprises also played a role in the economic integration of the country.

“Large German enterprises - this will be important for Korea - did their part,” he said, adding that Siemens also played its part. “By the end of June 1991, Siemens employed more than 20,000 people from the former east German republic.”

He continued, “Today, we know that it was worth every step along the way. Today, Germany is united. We have had our challenges but we are a free and democratic country. We enjoy peace and prosperity.”

As to whether the country is economically reunited, he pointed to studies that have shown that with regard to GDP, productivity and income, east Germany is still significantly behind west Germany.

However, he said that “it is astonishing that after 40 years of communist economy, the eastern Germany economy was reinvented and reindustrialized in a relatively short time.”

In a dialogue with Korea University President Yeom Jae-ho, Kaeser emphasized that the fourth industrial revolution represents the German and South Korean vision as they move toward a new world economic order. They spoke on the digital revolution, the necessity for companies to be able to reinvent themselves and change, as well as the need for innovation.

“Very few counties have prospered as much as South Korea and Germany since the end of World War II. The miracle on the Han put South Korea on the path of economic growth,” he said, similar to Germany’s Miracle on the Rhine.

Kaeser said the unification of North and South Korea, like it has been for Germany, can be costly and frustrating and take multiple generations for unification to happen.

But, he said, “Will it be worth the effort? Absolutely. You will change the world and the history of your country.”

The three-day forum which wrapped up on Friday, provided some 60 sessions and brought together over 4,000 people from nearly 60 countries. The forum is organized by the Jeju Peace Institute and hosted by the Jeju Special Self-Governing Province, International Peace Foundation, East Asia Foundation and The JoongAng Ilbo.

Kaeser quoted former German Chancellor Willy Brandt, who was Berlin’s mayor when the wall fell in 1989, and said: “Now what belongs together will grow together.”