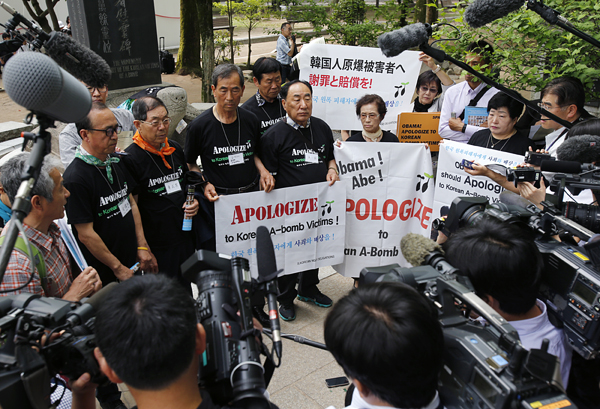 South Korean survivors of the atomic bomb and their supporters hold a press conference at the monument of the Korean victims of the bombing in Hiroshima Peace Memorial Park in Hiroshima, Japan, Friday. [AP/NEWSIS]

As President Barack Obama arrived in Hiroshima, the first incumbent U.S. president to visit the city, a group of Korean atom bomb victims flew to Japan on Friday to ask the president for an official apology and compensation from the U.S. and Japanese governments.

When American pilots dropped atomic bombs on Hiroshima and Nagasaki at the end of the World War II in 1945, more than 200,000 people were thought to have died. With tens of thousands of Koreans living in the cities, many working as forced laborers while Korea was under Japan’s colonial rule, the deaths and injuries of Koreans was by no mean negligible.

Out of some 70,000 Korean nationals exposed to radiation in the bombings, about 40,000 are estimated to have perished, according to the Korean Red Cross. While the organization says 23,000 are thought to have returned to Korea, currently some 2,500 are receiving treatment and assistance from the organization. As a good number of the Koreans forcibly sent to Hiroshima as laborers were from Hapcheon County in South Gyeongsang, it is not surprising that one of the first government-sponsored institutes to care for the atom bomb survivors was established in Hapcheon. Some 600 survivors, the largest group in Korea, live in the county today.

“When I was young, you could spot an atom bomb survivor down the block if you stepped into the markets of Hapcheon,” said Shim Jin-tae, head of the Hapcheon branch of the Korea Atomic Bomb Victim Association.

Photos of survivors hung on a wall in the branch office, one of a man burned to soot on the spot with his lips sealed permanently and a cigarette still sticking out of his mouth, another of a victim with serious burns on his arms and face.

“Back then, we survivors begged on the streets with burn scars, looking utterly homeless,” said Kim Do-sik, an 81-year-old resident of a welfare center for atom bomb survivors in Hapcheon, which currently houses some 100 survivors.

In the backyard of the center sits a memorial structure holding the names of 1,055 individuals who died from radiation exposure.

Visiting the center on Thursday, the JoongAng Ilbo found many of its residents in their 70s and 80s walking around listlessly or sitting in the living room blankly staring out windows. Yet they did not have trouble recounting what happened when the bombs dropped more than 70 years ago.

“I had just gotten into the office in the morning when I heard a booming sound,” recalled Lee Soo-yong, an 88-year-old survivor. “I don’t remember what exactly happened next, other than waking up to find shards of glass stuck all over my body.”

“Many of the survivors suffered the aftereffects of radiation,” she added, “but most of us did not know at the time that we had gotten sick because of the radiation.”

A special law for atom bomb victims, the first of its kind, was passed by the National Assembly earlier this month, which stipulates the establishment of a committee to investigate the welfare of the victims and their needs.

Han received an artificial joint operation in her 30s for a rare disease, and her son has cerebral palsy.

“The president is not going to revisit the decision to bomb Hiroshima,” Shultz said. “What he will do is, he will lay a wreath at the Peace Memorial… and reaffirm the United States’ commitment to working towards a world with no nuclear weapons.”