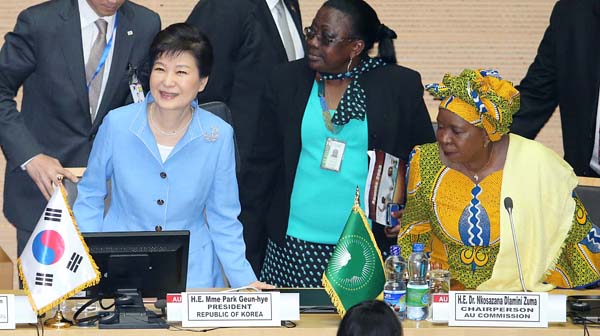 President Park Geun-hye steps into the Nelson Mandela Hall in the African Union Conference Center in Addis Ababa, Ethiopia, to deliver a speech on Friday. To her left is chair of the African Union Commission, Nkosazana Dlamini-Zuma. [JOINT PRESS CORPS]

President Park Geun-hye said she envisions a mutual partnership with Africa in a speech on Friday at the African Union Conference Center in Addis Ababa, Ethiopia.

“Korea will accompany Africa as a mutually developing and trustworthy partner to make the nation into a tree of life,” Park said at the Nelson Mandela Conference Hall.

In her speech, Park laid out Korea’s foreign policy vision for Africa, including “Agenda 2063,” a project devised by the African Union to promote socioeconomic transformation in Africa over the next 50 years, in which Korea will provide education and employment opportunities to African women and youth by sending volunteers and sharing Korea’s state-of-the-art information, communication and science technologies.

“For the next five years, Korea will provide training and education opportunities to 6,000 Africans in their home nations,” Park said. “Korea will cooperate with the African Union, which named this year as the year of women’s rights, in the fields of education and health for the future of girls in Africa.”

Park also vowed to help strengthen Africa’s public health sector in order to combat epidemic diseases. She said that with the cooperation of the Korea-based UN organizations Green Climate Fund and Global Green Growth Institute, Korea hopes to combat the various problems that Africa faces due to climate change, including desertification, and shortages of food and water.

She vowed to promote the modernization and development of agricultural villages in Africa by supporting the African version of Saemaul Undong, a community movement promoted by Park’s late father, Park Chung Hee. Park also outlined a development project, “Korean Aid,” in which trucks will deliver health, food and cultural services from Korea to the African people.

Park also thanked many of Africa’s nations for condemning North Korea’s nuclear provocations, and asked for their additional cooperation to pushing the North to give up its nuclear weapons. She vowed to help Africa combat piracy and increase the number of Korean UN peacekeeping operators in Africa.

“With the experience of signing the African Nuclear-Weapon-Free-Zone [in 1996], I hope African nations will further cooperate for North Korea’s abandonment of nuclear weapons,” Park said.

In the speech, Park said she hopes to achieve “favorable and forward-looking economic cooperation” with Africa. According to the president, Korea’s technology and capital, when combined with Africa’s abundant human and natural resources, could be a catalyst for the continent’s economy.

“If we combine Korea’s strength in the fields of ICT [information and communications technology], medicine, environmental and scientific technology with Africa’s creative human resources,” Park said, “we could initiate a new renaissance.”

About 1,300 people were present at the conference, including chair of the African Union Commission, Nkosazana Dlamini-Zuma, and the Ethiopian prime minister, Hailemariam Desalegn, as well as Ethiopian war veterans who fought in the Korean War (1950-53).

After delivering her speech, Park attended the Korea-Ethiopia Business Forum with about 150 businessman and heads of economic organizations. She also visited the Memorial Park for Ethiopian Veterans in the Korean War to commemorate the 65th year since Ethiopia’s participation in the war with the Ethiopian president, Mulatu Teshome, as well as the families of war veterans, Korean immigrants in the country and about 250 soldiers from the Hanbit Unit, a Korean military unit sent to help with the reconstruction of South Sudan.