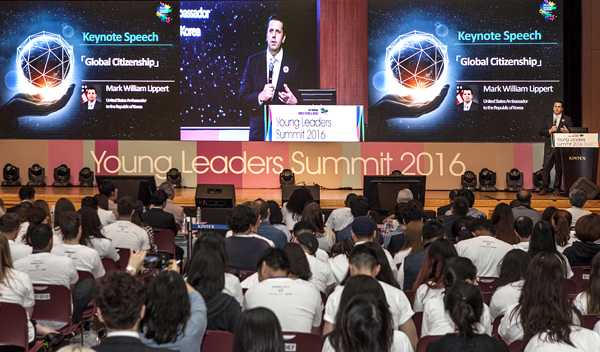 U.S. Ambassador to Korea Mark Lippert addresses some 700 young adults from 60 countries during the Young Leaders Summit hosted at the Korea International Exhibition and Convention Center in Goyang, Gyeonggi, on Friday. The young leaders, aged from 19 to 35, were recommended by Rotary districts to attend the summit on Friday, one day before the five-day international convention of Rotary International kicks off in Korea. [PARK SANG-MOON]

Just a day before Rotary International, a global network of 1.2 million volunteer leaders, hosts the biggest convention in its history to promote world peace and celebrate the spirit of serving others, hundreds of young adults from all over the world gathered in Korea on Friday to speak about their future and the future of the world and Rotary.

The Young Leaders Summit (YLS), held under the theme “Our Challenge: World Future & Rotary,” is the first of its kind in the history of the annual Rotary International convention. It brings together young adults to discuss the challenges of the world today.

“To have people at your age participating and being a part of the solution is incredibly inspiring for someone like me,” said U.S. Ambassador to Korea Mark Lippert, addressing some 700 young leaders from more than 60 countries.

Each recommended by a Rotary district, the young participants, who are in their 20s and 30s, gathered in the Korea International Exhibition and Convention Center (Kintex) in Goyang, Gyeonggi, to hear from renowned speakers on topics ranging from sustainability and global citizenship to education, technology and disease prevention.

“Being a global citizen isn’t optional anymore - it’s required,” the U.S. ambassador told the crowd. “The issues that face us today are increasingly global in nature, and it’s going to take global citizens working collectively to solve them.”

Emphasizing the importance of making investments in time, education and careers to become effective global citizens, the ambassador was not afraid to share his own experiences.

“I was behind the curve at your age, barely getting out of bed for class at college,” he said, drawing laughs from the crowd. Sharing the story of his experience studying abroad in Beijing, and how he got interested in foreign policy, the ambassador advised the young participants to pick “what works” for them.

Some speakers were unafraid to challenge the nature of charity organizations in general.

“I’m a bit cynical about the charity world,” said Adrian Hayes, a record-breaking polar explorer and adventurer, who spent months in Nepal last year visiting remote villages on earthquake relief efforts. “The salaries are so extreme, all expenses are vast, and very little of the money seems to go to the people who really need it.

“It doesn’t make a difference how much we have, it isn’t all about having a flash car, for instance,” he said. “My overall mission is to increase mindfulness, awareness and consciousness on what’s really important in our lives - which is family, relationships, growth and so on.”

The YLS participants will be joining the 3-kilometer (1.8-mile) walk in central Seoul Saturday that kicks off the five-day international convention of Rotary International. Open to the public, the peace walk is expected to attract some 5,000 Rotary club members, or Rotarians, who will parade from Seoul Plaza to Gwanghwamun Square, wishing for an end to war, poverty, conflict, disease and abuse. They will be joined by Rotary International President K.R. Ravindran, Seoul Mayor Park Won-soon and several ambassadors to Seoul, including the U.S., German and Irish ambassadors.

With the United Nations being a major partner of Rotary International, UN Secretary General Ban Ki-moon will be joining the opening ceremony on Sunday to deliver welcoming remarks.

From Monday to Wednesday, more than 50,000 Rotarians from some 160 countries will be holding one general session every morning where they will hear from speakers from all backgrounds, such as Michelle Stillwell, Paralympic gold medalist, Rosie Batty, Australian of the year in 2015, Rebecca Martin, director of Center for Global Health at the Centers for Disease Control and Prevention, and Dananjaya Hettiarachchi, 2016 Toastmasters International World Champion of Public Speaking.

The convention will hold its closing ceremony on Wednesday, with tens of thousands of Rotarians promising another year of “Service Above Self.”