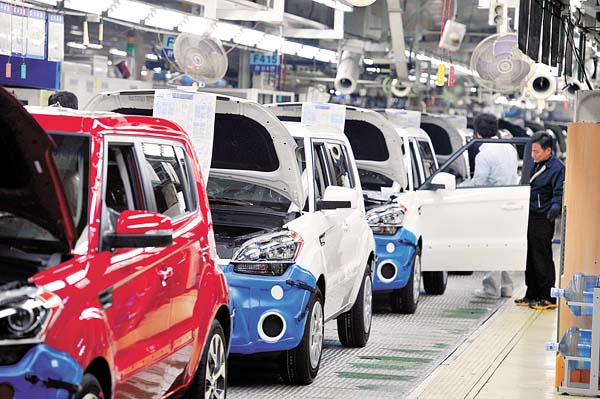 A production line in a Kia Motors factory in Gwangju. [JOONGANG ILBO]

Toyota is investing in and planning to collaborate with Uber, the largest ride-hailing service. Volkswagen is investing $300 million in the Tel Aviv-based Uber rival Gett. And that’s just Tuesday’s news. In January, General Motors put $500 million into Lyft, another Uber competitor.

Earlier this month, Apple invested $1 billion in the Chinese ride-hailing company Didi, and Fiat Chrysler made a deal with Alphabet to develop self-driving minivans.

After almost a century of making cars and selling them in more or less the same way, automakers (and others) are getting the sense that the business of automotive transportation might be about to radically change. Here’s Toyota executive Shigeki Tomoyama on the Uber deal: “Ridesharing has huge potential in terms of shaping the future of mobility. Through this collaboration with Uber, we would like to explore new ways of delivering secure, convenient and attractive mobility services to customers.”

In a future dominated by self-driving cars, it may be that car ownership will give way to on-demand mobility — a car shows up, takes you where you need to go, and moves on to the next passenger. That’s what Uber and the other ride-hailing companies are banking on. So is Alphabet, which has made the most progress so far in developing wholly autonomous vehicles.

It’s fair to say that auto executives aren’t wildly excited at this prospect. During a visit to Bloomberg last year, Renault and Nissan Chief Executive Officer Carlos Ghosn grumbled that Alphabet’s (at that point it was still Google’s) self-driving car was a “box” devoid of “seduction and attractiveness,” and said “the car industry will do everything it can to make sure that the product does not become a commodity.”

But auto executives are also familiar with Harvard Business School professor Clayton M. Christensen’s argument that if an innovation comes along that disrupts your way of doing business, there’s often not a whole lot you can do to stop it. The automakers cutting deals with ride-hailing companies are hoping that they can figure out an on-demand business model if it turns out they need to.
Can they? Tom Bartman, a senior researcher at Christensen’s Forum for Growth and Innovation at HBS, is dubious. “Business models can’t change,” he says. Once a business learns how to make money one way, it’s almost impossible to shift gears. Still, there is one slender reed of hope: “While businesses can’t change, corporations can.”

As an example of the difference, Bartman offers up Car2go, one of the global leaders in car-sharing — a form of on-demand mobility that requires a driver’s license. Zipcar, now a division of Avis, pioneered the modern car-sharing business in Massachusetts in 2000. Car2go was started by the business-innovation unit of Daimler, the car and truck maker, in the German city of Ulm in 2008.

What distinguished Car2go was that all the cars were Smart two-seaters, manufactured by Daimler, and they didn’t have to be returned to the same spot where you picked them up (Zipcars generally do). Customers liked it.

Although rental car companies’ attempts to imitate Zipcar have mostly flopped, Car2go now has more than a million registered members, making it — by that metric, at least — bigger than Zipcar. The reason Car2go worked, Bartman figures, is that Daimler was “not trying to change an existing business, not trying to copy another entrant, just identifying a job to be done.”

Cutting high-profile deals with ride-hailing companies doesn’t exactly fit that model — though maybe it will teach the automakers lessons they could use in developing future businesses. In the meantime, though, it’s Uber, Gett, Lyft and Didi that will be interacting directly with the consumers of “mobility services” and presumably building brand loyalty and gaining knowledge. Somebody has to build the cars that will shuttle us all around, so there will still be automakers.

But the risk of commodification that Renault/Nissan’s Ghosn is worried about sure isn’t going away.


*Justin Fox is a columnist writing about business. Prior to joining Bloomberg View, he was the editorial director of the Harvard Business Review.