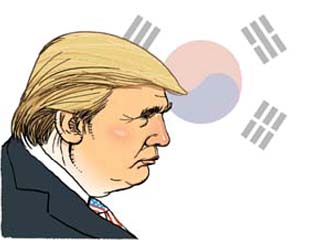 In February, no one imagined that Donald Trump would win the Republican primary when the Iowa caucus and New Hampshire primary results came out.

Having won a landslide victory in his home state of Texas on Super Tuesday, Ted Cruz derided Trump as a hopeless joker. However, Marco Rubio lost in his home state of Florida and quit the race, while Trump won in New York. After a crushing defeat in Indiana on May 3, Cruz gave up his candidacy, as did Ohio Gov. John Kasich. Trump was left as the only candidate in the Republican Primary.

Meanwhile, in the Democratic primary, Bernie Sanders is staying in until the end, putting up a surprisingly good fight against Hillary Clinton. Some predict that Clinton’s image will get more and more negative, and the longer Sanders lasts, the more his supporters will vote for Trump.

But hawks in the Republican Party didn’t see Trump as an appropriate candidate and wanted his candidacy contested at the Republican convention. However, they seem to have given up on other options due to Trump’s popularity.

The Trump sensation is based on Americans’ disillusionment with the political establishment. They are attracted to and trust Trump, who has no political background and speaks his opinions openly.

Whenever Trump is attacked by the media, he gets even more popular. Trump wears a hat saying “Make America Great Again.” Another of his marketing tactics is patriotism. When Nabisco moved its manufacturing plant from Chicago to Mexico, Trump said that he would never buy Oreos again, and Nabisco’s packaging now reads, “Proudly made in USA.”

In many opinion polls, Trump is ahead of Clinton. Despite expectations for the first female president in U.S. history, the 45th president of the United States is almost likely to be Trump.

However, Seoul is looking at Trump with worry. First, Trump recently said that he was willing to talk to Kim Jong-un. It goes against the Obama administration’s strategic patience of not talking to Pyongyang unless it agrees to give up its nuclear program. But North Korea’s nuclear capacity has grown, and the threat is closing in. So Trump wants to talk to Kim directly using his prided negotiation skills.

Second, Seoul is concerned with the expenses of the U.S. Forces Korea. Trump claims that 28,500 Americans risk their lives to defend South Korea, and the expenses should be shared equally. Former Secretary of Defense Chuck Hagel said the amount Korea currently pays seems sufficient. This is a matter of money and, in my opinion, dealing with Trump, a businessman, on the negotiation table would not be an issue.

Korea should not be afraid of Trump. He is the Republican presidential candidate. Republican policies have never betrayed Korea. No Republican wants the withdrawal of U.S. forces from the Korean Peninsula. Korea is the only successful case of a country that receives American aid becoming a country that gives aid. The two countries are blood allies that fought in the 1950-53 Korean War together. There will always be misunderstandings and friction. But fundamentally, Americans are friendly to Korea. Koreans can feel it when visiting the United States.

North Korea seems unstable. It may fall any time. When North Korea collapses, Kim Jong-un will ask for help from China. With the justification of suppressing rebellions, tens of thousands of Chinese forces may be stationed in North Korea. We cannot rule out the scenario of China staying around after Kim Jong-un’s fall and keeping North Korea as its territory. In order to avoid such a catastrophe, we need the support of the international community led by the United States. It is meaningless to bring the case to the UN Security Council, where China has a veto. Korea’s economy is also dependent on China, as it is our biggest trade partner. Diplomacy is more important than ever.

A newspaper reported that there are no foreign policy specialists in the new National Assembly. This is very worrisome.


*The author is a former U.S. representative.