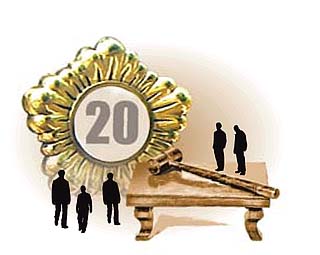 Would it be too much to ask the 20th National Assembly that formerly began office on Monday to assume their vested role to represent the people and historical mission in a state of emergency?

Everyone in this land would agree that we are in a critical transitional stage. The geopolitical climate around the Korean Peninsula has built up to the brink of either war or peace following North Korea’s surprise fourth nuclear test in January. Prospects for a peaceful path have become murkier.

Korea’s political democracy system — often cited as a model case of voluntary transformation from a dictatorship — has become overrun and withered. Polarization in the economy and society has weakened not only growth but also the confidence of the people. The 20th National Assembly was born through public awareness of a looming crisis and an aspiration for national rebuilding to avoid catastrophe. The Assembly must therefore play a role beyond that of a regular legislature with a sense of urgency.

But such hopes have come into question upon watching the scenes on the political stage over the last six weeks since the outcome of the general election, which delivered a stunning defeat to the ruling party and a majority to the two liberal parties. The three parties — all dogged by factional strife — were slow in gearing up their organizations for an unprecedented three-party legislative system. They were merely able to elect floor leaders and chief policy makers in time to meet with the president to talk of cooperation. Because of internal strife, all three failed to come up with a strategy or agenda to meet the reforms demanded by the people. They entirely forgot their task of recreating the governance structure because they were too engrossed in their own power struggles.

The 1987 Constitution, which limited the presidency to a single five-year term, ended military dictatorship and successfully staved off the long-term dominance of power and irregular election practices. We have seen peaceful transitions among six presidents and eight assemblies. But in performance, the system barely passed the democracy test of ensuring public participation in a representative system and fairness in governance.

The public has long become skeptical of the legislative election outcome and its activities. Over-concentration of power vested in the president has undermined the system to the extent of placing the competency of governance in question. What’s more, a lack of communication and cooperation between the legislature and administration, and between lawmakers and the president, became the primary weakness of the Korean democratic system.

The people have demanded something be done to fix the breach of confidence between the legislature and the president. It is more a matter of the system than the individuals in the offices. If the new Assembly fails to revamp the overall system, including a constitutional amendment, over the next year before entering the presidential election season, we will again merely see a change in the face of the chief executive office instead of any kind of meaningful national rebuilding. Regardless of internal problems and various political factors, the 20th Assembly must be true to its historical mission and launch a special committee by September to rewrite the Constitution and election law.

A democracy can work as a living system only when people become interested and engaged in debates and decision-making processes. The parties would have to clearly define their positions on reforms to the Constitution and the election law, and draw engagement and discussions from various parts of the society. Candidates bidding for the next presidency must also deliver their thoughts on whether they believe the Constitution and election law needs to be rewritten and if so, in what way.

The president also must express her thoughts on reforms that can upgrade the domestic political system. Political system reform will become the tipping point to reforms and reorganization in various state affairs, including the economic system.

The people all have expectations for the new Assembly because their performance can shape our future. The Assembly must realign the political framework and run it entirely anew and democratically with the help of public wisdom and ideas. We all must remember we are all in this historical challenge together.