[At Home with Her Excellency, France] A modern masterpiece for long-time friends

[At Home with Her Excellency, France] A modern masterpiece for long-time friends 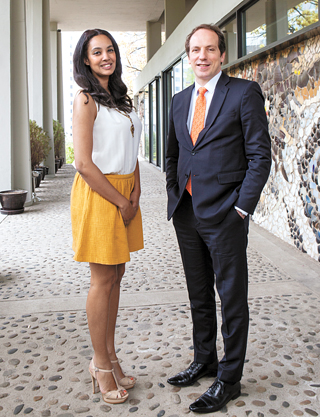 French Ambassador Fabien Penone’s first post as a top envoy comes at a very important time here in Seoul, as France and Korea celebrate their 130th anniversary of diplomatic ties this year with over 200 events in every field one could possibly imagine.

His wife Niagale Penone has ended up taking a role in many of them, often trying to make full use of her own diplomatic prowess honed over the years working as a political scientist on African security issues.

But when it comes to building more personal relationships with the local public, both agree that their youngest daughter Mahe, aged 2, may have gained the most know-how so far.

She spends six hours each day mingling with Korean toddlers her age at a day care center.

“She’s the only foreigner there,” says Mrs. Penone, laughing. “The other day when we were eating, she suddenly cried out masisseoyo (tasty)! It was so funny.”

France has the second-largest diplomatic network in the world. Residences of French ambassadors abroad are often beautiful examples of architectural heritage. They are also tools supporting France’s global diplomacy. The French residence in Seoul was renovated in 2000. It has a modern interior design and a collection of art pieces adorning its walls, sponsored by the French Ministry of Foreign Affairs and International Development. Entering the French residence allows our guests, and us, to feel at home while experiencing a small part of France.

A total of 15 ambassadors have lived here since 1962, and our family moved in last September.

The residence is composed of two floors. The ground floor is the private apartment where we live with our four kids. There’s a living room, several bedrooms and a big kitchen. The first floor is dedicated to official events, banquets and receptions. It’s a combination of three living rooms which makes the residence quite modular. There’s also a dining room, and the terrace in front of the main living room opens the interior space to nature’s beauty, especially during spring and fall.

The residence, garden and diplomatic offices here are all the property of the French state. This year marks the 130th anniversary of the establishment of diplomatic ties between France and Korea. The first French representative to Korea, Mr. Victor Collin de Plancy, arrived in Seoul in 1887, and the first French legation was accomplished in 1896. Ambassador Roger Chambard, who asked to have his ashes scattered at the Haein Temple in Hapcheon County, South Gyeongsang, after his death, is the initiator of the diplomatic compound we know today.

What’s the largest reception you hold in your residence?

Each year on July the 14th, we organize a reception for the French National Day, also known as Bastille Day, which commemorates the storming of the Bastille on July the 14th in 1789. Celebrating the flash-point of the French Revolution, we host several hundred guests at the residence.

The art pieces as well as most of the objects in the public area of the residence are lent by the French National Fund for Contemporary Art and a French institution called Mobilier National, which furnishes French institutions around the world, including ambassadors’ residences.

I personally feel very inspired by two artworks. One is a sculpture by famed French artist Arman, representing a distorted violin. My husband actually likes it the best. It represents an important French artistic movement from the 1960s, called the New Realists. This violin is part of a series called “Wrath.” It includes pianos, cellos, double bass and other musical instruments which are cut into pieces then carefully glued together and put on a pedestal. Arman, the artist, allows us to see the interior of objects, which are metamorphosed into works of art.

The second piece I chose to highlight, which is my personal favorite, is the ceiling of the dining room. It is inspired by the Daedongyeojido, a 19th-century map of the Korean Peninsula by Korean geographer and cartographer Kim Jeong-ho. It is a tribute to Korean traditions, showing the mountain ridges and rivers of the Korean Peninsula. I am very attracted by this idea of dialogue between our two cultures in the interior design of this residence.

Where’s your favorite area within the residence?

Would that be a place you spend your personal time, too?

Of course; this is a place I like a lot. We also have a private living room, but I have to confess I do not use it as often as I would like. We have four kids - aged 15, 12, 9 and 2 - and I also have to travel regularly for my work to Africa, the United States and Europe.

I have been working on African security-related matters for more than 15 years now as a political scientist, collaborating with the UN and the African Union. I’m also of African origin. My mother is French and my father is Malian, although he gained French nationality after immigrating to France in 1957.

How are your kids adjusting to Korea?

Our youngest daughter is actually in a Korean daycare center, the only foreigner in the entire establishment. She spends six hours every day with Korean toddlers. She now prefers rice to bread and speaks bits of Korean. The other day when we were eating, she suddenly cried out masisseoyo (tasty)! It was so funny.

It’s always nice to discover a new language and to be immersed in a new culture. My elder children, who attend the French school in Seorae Village, southern Seoul, have Korean classes, and I thought it would be a good opportunity for our youngest daughter, who was 18 months when we first arrived here, to pick up Korean language and culture. It will be a very rich and meaningful experience for her.

For some of our readers interested in visiting France, do you have any personal recommendations?

A nice approach to tourism is through food and wine. French tourism organizations have created a website (visitfrenchwine.com) to introduce global tourists to the most beautiful French vineyards. Visitors will find lovely landscapes, historic terroirs, traditional savoir-faire and more.

From Left: An inside tour of the couple’s residence shows many paintings by both French and Korean artists on the walls of the main living room. ; A room they refer to as le petit salon jaune, or “small yellow living room,” is their favorite public area within the house, often used for small meetings and one-on-one discussions with government officials and guests. ; The ceiling of the public dining room features a 19th-century map of the Korean Peninsula, known as Daedongyeojido. ; A distorted violin created by French artist Arman is displayed near the entrance of the house. [PARK SANG-MOON]