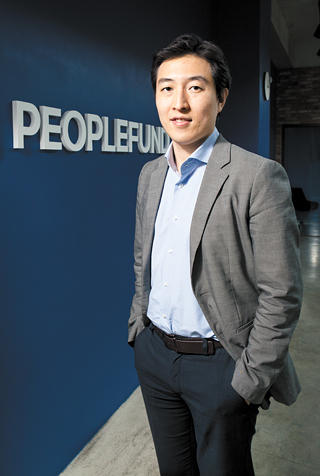 The idea of directly connecting borrowers with investors through online platforms - peer-to-peer, or P2P, lending - took off globally, but structural problems were soon discovered that led to the unauthorized use of funding as well as issues with the quality of borrowers.

Korean start-up Peoplefund, which came up with a different formula to reduce drawbacks by pairing up with a commercial bank, is due to start operations today.

With the partnership, Peoplefund is the first P2P platform that is not classified as a lending business. It took one year for the start-up to receive regulatory approval to operate as a supplementary service for the bank, what the regulator calls an incidental banking service.

The Korea JoongAng Daily sat down with Joey Kim, founder and CEO of Peoplefund, to discuss the platform and how the company navigated state regulations. Kim started his career as a consultant at Bain & Company and later moved on to join SoftBank Ventures Korea before he built his own company.

Q. How does Peoplefund work, and how is it different from other services for users?

A. All loans are processed through a bank-integrated system. Jeonbuk Bank lends us money in security of investments we received from our investors. Then, the loan from the bank is given to borrowers. All transactions are recorded because it is done through Jeonbuk Bank’s accounts.

This is a major difference from other P2P services. Since existing P2P businesses are categorized as lending businesses, they don’t have an integrated system to share the credit information of borrowers unlike commercial banks, carrying inherent risks.

This means that the P2P lenders could lend more money than one deserves, missing out on financial track records.

Another advantage of the tie-up with a commercial bank is that it can prevent P2P platform operators from manipulating funds by users. In countries like China, for example, P2P start-ups are accused of unfairly managing their customers’ money, and such cases can take place when an operator works in a gray area without strict monitoring.

But the partnership with a tier-1 bank like Jeonbuk Bank gives us more scrutiny, which will lead to a more safe and transparent management of money.

Who are the target customers?

We are aiming at people whose credit ratings fall between 3 and 5 [out of 10]. But it doesn’t necessarily mean that we only serve people with those ratings. Peoplefund determines borrowers’ credit level based on records from credit rating companies in the first phase. Then, we examine the records in the next stage on our own. If a person with level 7 has a good financial record in recent days and has restored his or her rating from lower ones, we will give a green light.

Another target group is young and tech-savvy people in their 30s who are more accustomed to digital platforms. They are more open to a new system. And our service is far simpler and convenient than loan services from other banks but as safe as commercial bank services because we are backed by Jeonbuk Bank. All processes can be carried out digitally.

The young population living in Seoul is also the primary reason why Jeonbuk Bank teamed up with Peoplefund. The bank wanted to broaden its reach in Seoul when it comes to pitching consumer loans through the partnership, since its main branches are clustered in North Jeolla.

How did Peoplefund deal with the regulation issue?

Earlier this month, we managed to receive approval after several meetings and submission of business reports to the regulator. But I believe it was worthwhile because we paved the way to offer a safer P2P service. I hope that more P2P services operate in partnership with banks to run less risk. There is an association representing P2P companies. There, I tried to give some advice to companies who want to build a similar system.

Generating meaningful revenue is the key issue for many start-ups. How can Peoplefund generate sales?

Most of our revenue will come from commission fees at 1-1.2 percent. I know other P2P services don’t receive any commission to attract more clients. But I believe that to sustain the business and offer quality service, such fees are inevitable. Unlike other services, we also offer credit management and other offerings thanks to the partnership, so we still have a competitive edge even with the commission fees.