Waiting for a virtual reality revolution

Waiting for a virtual reality revolution 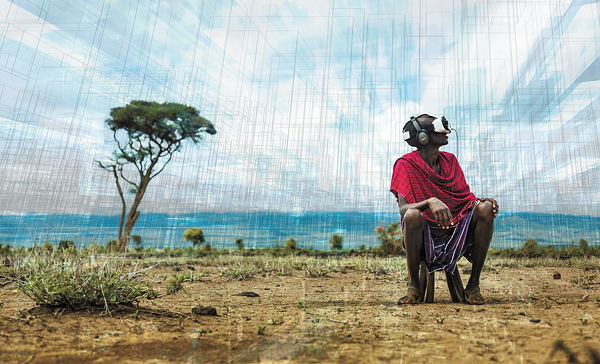 For those looking to overcome a fear of heights, the first step may now involve donning a virtual reality (VR) headset.

The next step is a little scarier: a walk along the edge of a virtual skyscraper, or even a leap off the side.

But the experience allows users to get used to being up high without the accompanying risks - and makes it easier next time they have to do something like drive over a bridge or ride a glass elevator.

This was the case for dozens of participants from Korea, Germany, Russia and the United Arab Emirates as part of Samsung Electronics’ “Be Fearless” campaign earlier this year, where 87.5 percent saw their fear of heights reduced after four weeks of training.

The campaign was part of Samsung’s recent efforts to promote its $99 Gear VR headset by showing how it can be used for more than just fun.

“VR started out as a form of entertainment,” said Peter Koo, senior vice president of Samsung Electronics’ mobile communications division, in a recent speech, “but it is now about the illusion that you are experiencing a certain event or are placed in a different space.”

Facebook Founder and CEO Mark Zuckerberg made a similar point earlier this year.

“I always thought there must be a way that’s instead of navigating to 2D websites, you could actually be there,” he said in February as he made a surprise appearance at Samsung’s Galaxy S7 media showcase on the sidelines of the Mobile World Congress 2016 in Barcelona.

“One day you’re going to be able to put on a headset and that’s going to change the way you live, work and communicate,” he said.

VR will affect how people watch films and sports, purchase consumer goods and real estate, create art, receive an education and get treated by doctors, experts say. People like David Cole, the co-founder of American VR live broadcast start-up NextVR, predict head-mounted VR displays - or whatever form the technology evolves into over time - will ultimately replace TVs and computers and become as commonplace as the smartphones of today.

Breaking the past couple of years’ quiet since California-based Oculus, later acquired by Facebook, first burst onto the VR market in August 2012, both premium producers and smaller, mostly Chinese players have unleashed a number of VR headsets since last year. The headsets are powered by different devices. Facebook’s Oculus Rift and HTC’s Vive are tethered to a computer, Sony’s PlayStation VR to its game console and Samsung’s Gear VR to smartphones.

One company making big moves in the sector is Google, which first unveiled a cheap VR viewer made from cardboard in 2014. But two weeks ago, it launched a hardware and software platform dubbed Daydream to help all Android smartphone manufacturers create their own VR headsets. The company’s ultimate goal is to make Daydream the de facto standard for mobile VR.

The recent outpouring of VR headsets has triggered various upbeat predictions for the future. Deutsche Bank says users of VR devices around the world will total 6.5 million by the end of this year, ultimately soaring to as many as 24.4 million by 2020.

The size of Korea’s VR market, which includes revenue from the sales of devices as well as content, is expected to grow almost nine-fold over the same period to 5.7 trillion won ($4.8 billion), according to the Korea Virtual Reality Industry Association. Attracted by the potential of the futuristic media platform, the Korean government earlier this year vowed to invest 61.6 billion won in the VR industry through 2016, totaling 185 billion won by 2018. 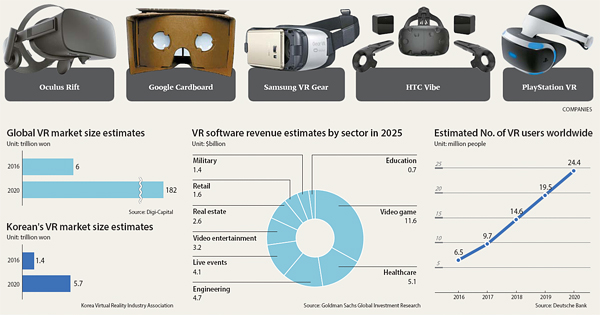 There is no doubt that the potential of VR has come into focus in 2016. But here in Korea, customer-ready content seems to be stuck in either the planning or building stages.

The majority of big software developers and content providers are hesitant to make substantial investments in VR, opting instead to wait until they are sufficiently convinced about the market potential and cross-platform compatibility of VR.

Korea’s top three game developers - Nexon, Netmarble and NCsoft - have yet to release any VR games, and none has set up an independent department devoted to VR. The inaction goes against common expectations that the game industry would be the first to move, considering that gaming is expected to make up the biggest piece of the revenue pie in the global VR industry at 33 percent by 2025, according to Goldman Sachs’ January report on the VR industry.

“It’s complicated,” said a spokesman with one of the three companies, who requested anonymity. “It’s a question of which comes first - the chicken or the egg. But from a game developer’s point of view, it’s burdensome to jump into VR, when all different VR platforms are still in the making and it’s hard to predict which of them is to become a dominant platform. We are going to watch the market a little bit further before making a strategic decision.”

Many people assume converting existing games into VR versions will be easy. But producing a VR game requires a massive budget because of just how interactive and immersive it has to be.

Only a handful of smaller players in Korea have ventured into VR games. Online game developer JoyCity is set to produce a VR version of its hit title “Gunship Battle 2” specifically for Sony’s PlayStation VR by the end of this year. HanbitSoft, best known for “Diablo,” is scrambling to unveil three VR games, including one where players can learn to cook from celebrity chefs.

Outside of the gaming industry, some 200 existing video production companies and individual video creators have begun to produce VR content starting this year, propped up by the relatively low barrier to entry.

“When you try to enter into a new business, top consideration would be whether there is going to be a market for it. The VR market in Korea hasn’t been established properly yet,” said Yoon Seung-hun, founder and CEO of Jamong, a VR content provider. “Everyone can produce VR content, but making it so attractive as to encourage consumers to pay for it is a different matter because small budget and investment inevitably leads to low-quality content.”

His one-year-old start-up operates apps for both Android and iOS that offer some 160 VR videos featuring idol groups, sports games and history and tourism sites. The app charges 1,000 won for adult videos, of which there are only 10. Jamong currently earns the largest portion of its revenue from commissions for sharing the content it owns to other VR content providers.

“It will probably take up to two years for my business model to actually turn a profit,” he said. But when asked if the company was able to benefit from the presumably substantial demand from China for VR videos featuring popular Korean celebrities, the engineer-turned-entrepreneur said that China is already way ahead of Korea. Chinese VR content distributors have taken advantage of a substantial number of videos from YouTube, either illegally or by paying small licensing fees.

“Hardware is ahead of content when it comes to virtual reality now,” said Hyun Dae-won, head of the nine-month-old Korea Virtual Reality Industry Association, in a recent interview with a Korean media. “The gap needs to be closed but it will take time, given high-resolution VR video content requires as much budget and time as films.”

Dillion Seo, the cofounder of Oculus who now runs VoleR Creative, an immersive dating simulation game developer, pointed out the lack of funding for the VR content ecosystem in Korea.

“It’s nearly impossible to turn a profit out of VR content in Korea at this moment,” Dillion Seo, co-founder of Oculus and CEO of VoleR Creative, was quoted as saying by Edaily, a Korean economic daily. “Capital injections are very important for the VR industry, and an estimated 1.1 trillion won has been invested in VR and [augmented reality] markets across the globe in the first half of this year. But Korea ended up attracting almost nil.”

A revolution in the making

Outside of Korea, businesses have been resilient in making various experiments to find business opportunities and create synergy with VR.

Chinese e-commerce giant Alibaba in March announced its own VR research lab, dubbed GnomeMagic Lab, where it will work with its shopping businesses with an eye towards integrating VR into the shopping experience while exploring other applications.

Some hotels and resorts are already using VR for promotional purposes.

Atlantis, The Palm, a five-star luxury resort in Dubai, operates an app that lets potential customers get a first-person tour of the resort. Customers are greeted by staff as they enter the lobby and are taken down to the underwater “Neptune” suite, where they can see huge sharks and other fish swimming past the windows.

Samsung Electronics joined forces with Sublimotion, a high-end restaurant at the Hard Rock Hotel Ibiza to produce seasonal events involving VR. The next event will take place June 1, where participants will don Samsung Gear VR headsets that turn the nearly 230 feet of white walls into an ever-changing visual backdrop. The restaurant will offer 12 diners each day a multi-sensory 15-course meal that costs $3,000 per person.

At a time when there’s relatively little content available, the average consumer would be forgiven for not racing to buy one of the clunky, expensive devices currently on the market, and this presents another major problem for the VR industry.

With the exception of Google’s $10 Cardboard VR viewer and the Samsung VR Gear, most VR headsets are expensive. Oculus Rift and HTC Vive, for instance, retail at $599 and $799, respectively.

Improvements also have to be made to VR headsets for them to be adopted on a massive scale. Producers including industry leader Oculus are focused on further developing haptics (use of hands), visual displays (pixel density and quality) and audio quality.

“We expect product releases in 2016 to begin addressing these challenges and to see continuous product improvement over the next three to five years,” said Goldman Sachs in a January report.

“The high price of VR devices will act as a significant barrier to more widespread uptake,” said David Watkins, director of Strategy Analytics’ Connected Home Devices service. “Major game publishers are waiting on the sidelines until there are enough VR headsets and users in the market for it to make financial sense for them to build a VR library of content.”

But he noted the current situation provides “independent and niche developers the chance to make a name for themselves before the big boys arrive.”