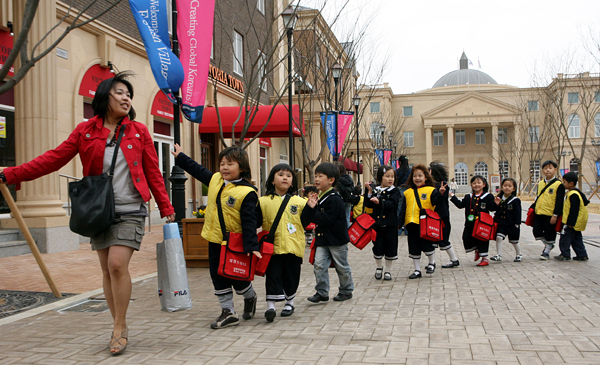 Gyeonggi English Village, the first residential English camp in Korea located at Paju and Yangpyeong, Gyeonggi, is closing down after a decade of operation.

Gyeonggi English Village, which opened in April 2006, was created to give the public a place to experience English-speaking culture and learn the language in the context of everyday life.

The village has struggled with low attendance. Last year, approximately 22,000 people visited the English Village, or about 610 visitors per day. The village lent out ten of its 17 buildings to other organizations to augment its revenues. With the boom in private language academies and more students travelling abroad for language study, demand for the village’s more carefree classes was undercut.

To remedy the situation, the Gyeonggi English Village Foundation signed a Memorandum of Understanding (MOU) Saturday with the Ministry of Education, the Gyeonggi Provincial Council, the Korea Foundation for the Advancement of Science and Creativity and the Software Policy & Research Institute to turn the camp into a youth development center. The new center will be dedicated to cultivate new kinds of talented students.

“We have felt a sense of crisis that under the current education system, it would be challenging to prepare for what’s coming in the future.,” said Nam Kyung-pil, governor of Gyeonggi. “Accordingly, reform of the education system is becoming a hot topic in the country.

With this in mind, the purpose of the MOU today is for Gyeonggi to establish an educational foundation for the future and lead the way.”