Rotary President Ravindran exhorts, ‘Be a gift to the world’

Rotary President Ravindran exhorts, ‘Be a gift to the world’ 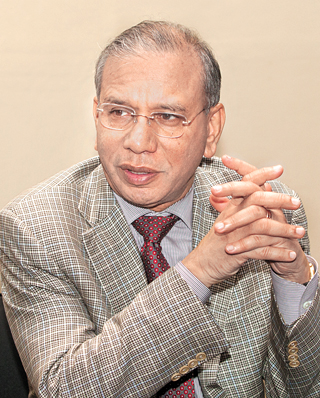 Rotary International President K.R. Ravindran has spent only 11 days at his home in Sri Lanka this year. He has been on the road visiting 47 countries to meet and encourage Rotarians to build clean toilets in schools or renovate run-down hospitals - all part of “being a gift to the world,” the theme of the Rotary International Convention that opened in Kintex in Goyang, Gyeonggi, on Sunday.

With 50,000 participants, it is the largest convention in the organization’s history.

The Korea JoongAng Daily spoke with Ravindran to ask what drives him to commit 100 percent of his time for a year, without getting paid, to the 1.23 million-member group.

The following are excerpts of the interview.

Q. Rotary International has been hosting conventions annually for more than 100 years. Why did it choose Korea for this year’s?

A. The convention has a very competitive bidding process. The bid from Korea, the attractions it offered, was very attractive to us. Korea is a mixture of tradition and technology, of modern living and ancient culture. Korean people are very friendly and welcoming toward foreigners and visitors. Korea has infrastructure - it had everything going [for it].

This year’s convention in Korea has the largest number of delegates ever recorded in the history of our conventions. That is a milestone by itself. And in order to achieve that, many things have come into focus: one, the country itself as an attractive destination, and two, the magnificent organizing capability of Host Organization Committee Chair Sang-koo Yun and his team. These two things put together give all the ingredients for a very good convention.

Of course, the third one is the infrastructure. A good convention facility, great transport facilities, very good hotels and accommodations, terrific airport, what more can you ask for?

What are some projects that the organization is focusing on?

Rotary has got only one corporate project: that’s the eradication of polio. Apart from that, we will support all our clubs around the world to do whatever they can, which can vary from community to community, country to country, city to city, village to village.

For example, in Seoul, you have a smog problem. If Rotary wants to do something about it, we would support it. It’s the same elsewhere, like a sanitation or water program in Africa, or literacy program in India, and so on.

What sets Rotary apart from nongovernmental and international organizations providing community service to others?

I think the secret is in our membership. The quality of our members coupled with the values that we bring means not only are they generous in their giving, if you take us against other traditional service organizations, our foundation is much larger, the projects we do are much larger - and the reason for that is the membership.

We got very good membership to attract people into Rotary, and that’s a message I’d like to tell the people of Korea. Here is a great venue, a wonderful way through which you yourself can help [others] by just getting together with friends.

Some people generalize Rotary clubs as gatherings of elitists.

And we ask people not to give up everything and do service - we don’t want everyone to be Mother Theresa. We’re just saying that [while] you lead your life, give some part of it through Rotary, through the fellowships created in Rotary to help others.

[In the past,] Rotary consisted of people in very influential positions. The reality is that when you are in an influential position, you can get things done. To become influential, most often you can’t be a young person. But now, with technology changing, today the young people are more influential than older people: with networking, with the internet, and Twitter and other communication systems.

Rotary International also has very young members, with people aged 12 to 18 in the Rotary-sponsored organization Interact, and people from 18 to 30 in Rotaract.

Yes, and both of them have been very successful. Interact is mostly based in schools, while Rotaract can be university- or community-based. A lot of people you see here in Korea are Rotary Youth Exchange participants or Rotaractors. Rotaract is a sort of a stepping stone between Interact and Rotary itself. Though not all, many Rotaractors join Rotary clubs.

How was this year’s President’s Theme, “Be a Gift to the World,” chosen?

The President’s Theme is always from the president. Of course, he or she always consults family, close relations and staff. It’s not always easy to come up with it - it’s got to be only three or four words, something which translates well to other languages, something that nobody else has said, something that’s not been patented, so it’s quite a job really coming up with a theme.

My theme this year, “Be a Gift to the World,” means that everyone’s time on earth is limited. Every moment is precious. Every day is precious. And my message is: don’t waste that moment or that day.

How come Rotary International elects a new president every year?

Because no one will do the job for more than a year. It’s a very grueling job, and we are volunteers, we don’t get paid for it. So it’s a big sacrifice that you make. And part of the success of Rotary is the changing leadership. We have our staff in charge of administration, but the presidents change because they [need to commit] one year to give 100 percent of their time.

What do you consider your proudest accomplishment as president of Rotary International?

If there is one thing that non-members should know about Rotary, what would it be?

Tell them, they don’t know what they are missing. If they join Rotary, they will never regret it.