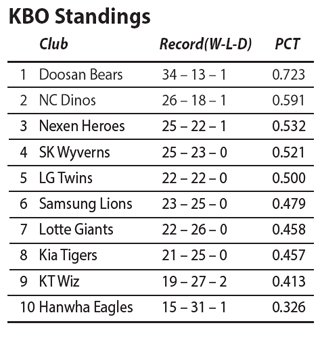 May ends in a rollercoaster ride for the Hanwha Eagles

The last week of May was a rollercoaster ride for the Hanwha Eagles, who had a three game winning spree but also saw pitcher Jung Woo-ram get into an unfortunate accident.

On his way home from an away game against the Nexen Heroes in Seoul on May 26, an unknown driver crashed into the side of Jung’s car and drove off.

“Jung received another MRI at the hospital,” said an Eagles spokesperson on May 28. “There are no apparent physical problems with him but he will take a few days off to recover from the shock.”

Although Jung was not placed on the disabled list, he hasn’t appeared in a game since May 27.

“Although test results indicated no injury, we cannot risk anything,” said Kim Sung-keun, the Eagles manager. “We will wait and see.”

Jung has played in 20 games this season, tossing in 29 and 2/3 innings with one win, one loss and six saves while carding a 1.82 earned-run average as the closer for the Eagles.

While Jung was absent from the game on May 28, the Eagles came out with a home win over the Lotte Giants. The Eagles started their three-game winning streak on May 26 against the Heroes and defeated the Giants in the next two days at home at Eagles Park in Daejeon.

During the 9-6 win over the Giants on May 28, the Eagles’ pitching lineup got into trouble when starter Lee Tae-yang conceded four runs in the first three innings. But Sim Su-chang came to the rescue in the fourth inning, tossing for the next four innings with no runs. With Sim thwarting the Giants’ attempt to score, the Eagles batting lineup pulled their socks up to add points for the Eagles. When the team was behind 0-2 in the third inning, the Eagles infielder Kim Tae-kyun smashed a double worth three runs batted in. After Yang Sung-woo leveled the score in the fifth inning with a solo homer, the Eagles eventually pushed ahead of the Giants in the sixth inning with Jung Keun-woo’s clutch hit worth two runs batted in.

“Our relievers brought us the win,” said the Eagles manager after the game.

As of Monday, the Eagles’ season record stands at 15 wins, 31 losses and one draw. 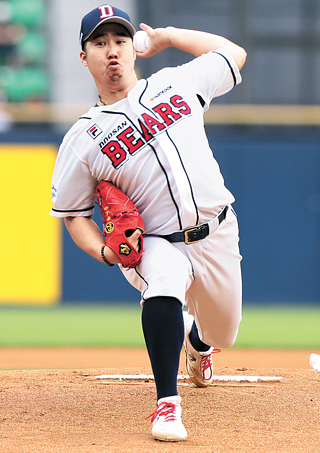 The Doosan Bears are continuing their run in the KBO. At the front of the line, Doosan’s four starting pitchers are leading the way while vying for the top position in rankings for wins. As of May 30, Dustin Nippert leads the standings with eight wins, while Michael Bowden, Jang Won-jun and Yu Hui-kwan are tied at third with six each.

Yu and Bowden are the youngest among the group at age 29.

In the Jamsil Derby against the LG Twins on Friday, Yu pitched for seven innings and gave out eight hits and no runs while striking out three batters. The Bears continued its run with four straight wins and Yu earned his sixth win of the season. He has yet to record any losses in the season so far.

Even though Yu has allowed at least one run in every inning he played in except the second, he showed his tenacity by allowing no hits when a runner was in scoring position. Yu came close to giving out a run when the Bears outfielder Min Byeong-heon mistakenly allowed a runner on the second base. But the Bears prevented the Twins from scoring by flying out the next Twins batter, Oh Ji-hwan. That was perhaps as far as Yu came to allowing a run for the Twins while he was on the mound. Eventually, the Twins scored one run after Yu stepped out of the field in the eighth inning.

“He’s done his usual,” said Bears catcher Yang Eui-ji. “I think he struggled early in the season due to the pressure that he had to play well, but I think he’s over that now.”

“As long as the starting pitchers maintain the current pace, I think it shouldn’t be a problem for our team to continue with its run,” said Yu. “I began tossing sliders recently and I think that threw off the batters.”

Although Yu had 18 wins last year, he struggled towards the end. “I got greedy about winning a title and began sliding,” Yu added. “This year, I just want to keep up this momentum.”

The Bears’ winning streak continued throughout last week until it came to a halt on Sunday when the Twins outpaced the Bears 16-8 in the last game of the Jamsil Derby.