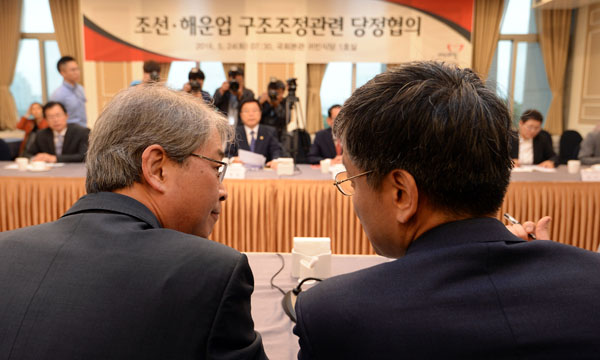 Financial Services Commission Chairman Yim Jong-yong, left, and Vice Minister of Strategy and Finance Choi Sang-mok talk at a meeting with political leaders at the National Assembly in Yeouido, southwestern Seoul, on May 24. [NEWSIS]

The Finance Ministry and Bank of Korea (BOK) are acting amateurish over the corporate restructuring program. The key to restructuring is what should be done with distressed companies and how much of their assets and employees need to be scaled down. Recapitalizing the state-run banks to finance restructuring through bailouts and debt rescheduling is a peripheral issue. It does not need to be the primary issue, nor a cause for delay in the agenda.

The state-run Korea Development Bank and Export-Import Bank of Korea are in bad shape because they were forced to take on the bulk of debt from troubled shipbuilders and shippers that fell on hard times. To clean them up would require more funds. The government wants the BOK to fund them so that public financing won’t be needed. That is nothing new.

But the idea raised controversy because it was publicly demanded instead of being quietly coordinated. The ruling Saenuri Party touted the idea and called it “Korean-style quantitative easing” during the general election campaign in April. It probably hoped the idea would draw as much as public interest and support as Abenomics had in Japan. But it only triggered controversy and misunderstanding.

Quantitative easing is an unconventional monetary expansion means done by a central bank. The central bank prints money to boost liquidity when interest rates are near zero and cannot be further cut to increase liquidity. The United States, European Union and Japan have resorted to this following the financial meltdown in 2008.

The Korean version borrows the idea of having the central bank purchase bonds from state-run banks to increase their liquidity, but at a much smaller scale compared to a typical quantitative easing program. In fact, it theoretically does not deserve the name at all. Bolstering funds at state-run banks could have been done through discreet discussions between the government and BOK. How they recapitalize state-run banks should not worry the public.

But the ruling party made it part of its election platform. The government outright pressured the BOK. Corporate restructuring suddenly became the BOK’s job and responsibility. The public began to take interest precisely because of the wrangling. The BOK, which has always been protective of its independence, acted emotionally. But secretly, it may not have wanted to take the responsibility.

Back-seat drivers started speaking their minds. Some said the central bank was too timid in helping out in economic affairs compared to counterparts in the United States, Europe and Japan. BOK Gov. Lee Ju-yeol snapped back that all the government was doing was demanding money before it had set any direction on the restructuring. The Finance Ministry and BOK were pushed into a fighting ring without any rules. They now could not quietly settle the issue with so many eyes on them.

After a month of wrangling, the two finally decided that they would come up with a final plan by the end of June, even as the troubled industries are in urgent need of help. The discord took place because there was no mediator between the government and central bank. They could have avoided a public skirmish if they coordinated the matter silently amongst themselves.

The government and politicians are most at fault. The Saenuri Party disgraced itself with a boisterous factional dispute over candidates for the April election. It was punished by the voters and lost its majority in the new legislature. The internal strife worsened because the party’s leaders failed to take on a mediating role.

The three parties and the president agreed to meet regularly for cooperative management of state affairs. But the president’s veto of a law allowing the legislature to hold hearings whenever necessary splashed cold water on the hard-won reconciliatory mood between the presidential office and legislature. The age of concord died almost overnight.

Behind-the-scene negotiations can raise transparency issues. But they can nevertheless be useful in preventing conflict and facilitating agreements. There is too much unnecessary wrangling in Korean politics. The parties, government and presidential office could get a lot more work done through silent coordination for a compromise.

King Jeongjo of the Joseon Dynasty, incessantly challenged by mainstream nobles, was able to build power through behind-the-scenes politicking. He sent 299 letters to his political opponents to discreetly explain his position and draw support for his reform agenda. A king should be able to kneel in the interests of his people. That is why King Jeongjo is remembered as one of our best leaders.


*The author is acting editor-in-chief of the JoongAng Ilbo.