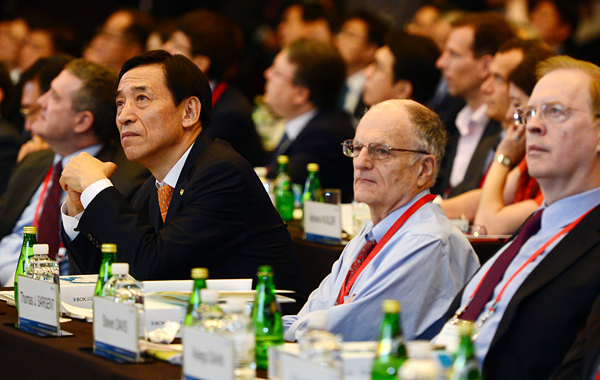 Lee Ju-yeol, the governor of the Bank of Korea (BOK) called for active policy measures to support start-ups in the service sector to create jobs and increase incomes.

At the 2016 Bank of Korea International Conference that kicked off on Monday, Lee said, “We need to boost aggregate demand by actively pushing policies to expand employment, the source of household income.

“To this end, we should strive to maintain the macroeconomy in a stable manner so as to create conditions favorable to employment,” Lee added.

In the eight years since the global financial meltdown, world economic growth is gradually approaching its pre-crisis level, but has recently shown signs of deceleration, the governor said.

As many as 25 senior executives from international economic organizations and central banks around the world, including Min Zhu, deputy managing director of the IMF and James Bullard, president of the Federal Reserve Board of St. Louis were in attendance at the two-day forum.

“I believe that the 2008 global financial crisis gave us an opportunity to rethink the importance of employment,” Lee said. “Until the crisis, the role of employment had not moved beyond supporting the demand for labor needed for economic growth. Employment should play an active role in stimulating growth.”

Lee touched on policies to ensure that employment can drive growth. From the macroeconomic perspective, the governor put emphasis on boosting aggregate demand, while calling for some microeconomic measures to create new jobs, such as encouraging more people to start their own businesses, and strengthening the competitiveness of the services sector with its huge job creation potential.

“Next, I would like to emphasize the need for efforts to ensure that the increase in income stemming from expanded employment also leads to an increase in consumption,” Lee said. “To this end, it is necessary to alleviate people’s uncertainties about the future by reducing the imbalances in wages and employment conditions among workers, and strengthening our social safety nets.”

Digital innovation will have positive impact on employment, the governor added, despite fears that demand for labor will decrease and employment will shrink due to technological advancements.

“If more people can assimilate and utilize various digital technologies such as artificial intelligence and big data, I think such technological advancements will positively affect employment and growth,” Lee said. “A bigger pool of creative talent will enable the creation of new industries and new markets, and as a result create new jobs. This will boost effective demand and bring about a virtuous cycle of growth and employment.”