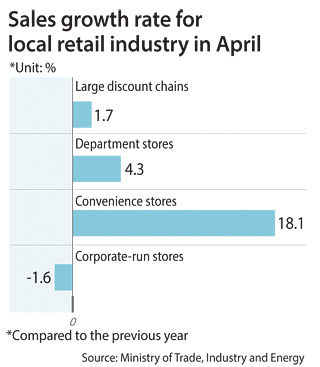 Most sectors of the local retail industry saw sales growth in April compared to the previous year, largely thanks to an additional holiday designated by the government for the general election.

“Department stores saw their sales rise as there were more holidays, and also because this April was warmer than last year” said Chun Eung-gil, a director at the Ministry of Trade, Industry and Energy. “It appears that more people visited department stores to avoid the heat and to shop for summer clothes.”

According to the ministry, the average temperature for April was 20.3 degree Celsius (68.6 degrees Fahrenheit), 1.5 degrees higher than last year. By item, sales of menswear and popular foreign clothing brands rose.

Convenience stores saw sales rise 18.1 percent in April from a year earlier, and the ministry said that this was mainly due to a rise in sales of tobacco products and precooked foods.

Sales of tobacco and other related items accounted for 44 percent of total sales in non-food products, and rose by 16.2 percent in April. The government’s other data released this month also showed that sales of alcohol and tobacco have gone up in the first quarter of this year, even though people have largely been spending less.

Sales at corporate-run supermarkets fell 1.6 percent during the same period as the price of livestock, fisheries and eggs dropped.

Sales of agricultural products accounted for 37.6 percent of the sector’s total sales, and these fell 1.8 percent year on year.

The government based its data on three large discount stores - Lotte, Hyundai and E-Mart - along with several corporate-run supermarkets including Homeplus and GS Supermarkets.