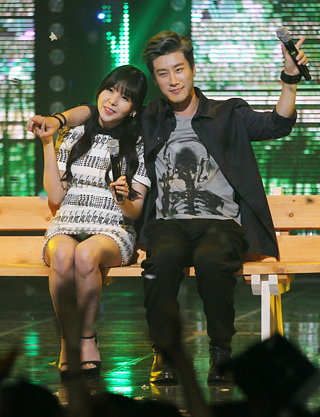 Rapper San E and Raina, a member of the K-pop girl group After School, will collaborate on another song.

Ilgan Sports, an affiliate of the Korea JoongAng Daily, reported on Monday that the two singers, who two years ago recorded the hit song “A Midsummer Night’s Sweetness” together, will sing another duet.

Detailed information about the song, such as its genre and title, have not been decided yet, but the song will be released in the middle of June, about two years after their previous track. Ilgan Sports reported that their upcoming song will be similar to “A Midsummer Night’s Sweetness,” a medium-tempo ballad song with cute lyrics.

First released in June 2014, “A Midsummer Night’s Sweetness” was nominated for Song of the Year at the 2014 MelOn Music Awards, along with Taeyang’s “Eyes, Nose, Lips” and “Some” by Soyou and Junggigo.

The song also stayed on the top of the Genie Music chart for 77 hours, unlike most songs which come and go within less than 24 hours of release, and the collaboration project was named song of the month by Gaon Chart in July 2014.