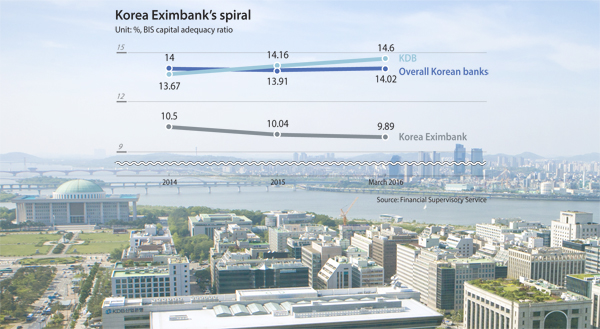 Korea Development Bank (KDB) has decided to help out another state-run bank, the Export-Import Bank of Korea (Korea Eximbank), after its financial soundness declined in the first quarter because of troubles in the shipping and shipbuilding industries.

The two banks, which are currently overseeing the restructuring of the two industries, need to raise their BIS ratios to 14 percent in order to receive government or central bank funding needed for the restructuring. The BIS ratio is a global standard to measure banks’ capital health.

KDB on Monday announced that its board members decided to finance Korea Eximbank to the tune of 500 billion won ($420 million) to raise the latter bank’s ratio. The investment will be made in an equity swap. KDB will be giving Korea Eximbank 7.8 percent of its stake in Korea Aerospace Industries (KAI) in exchange for 4.7 percent of Korea Eximbank shares.

The decision came after Korea Eximbank’s capital adequacy ratio turned out to be the lowest among banks in Korea. Its BIS ratio as of March was 9.89 percent, according to a Financial Supervisory Service (FSS) study that was released on Monday.

The financial authority considers 10 percent the minimum for a bank to be considered sound. A ratio below 10 percent indicates insolvency.

At the end of the year, Korea Eximbank saw its BIS ratio move up to 10.04 percent from 9.44 percent at the end of last year’s third quarter. Its third-quarter BIS ratio was below 10 percent because Korea Eximbank was injecting money into debt-ridden SPP Shipbuilding and Keangnam Enterprises. The BIS ratio in the following three months improved largely thanks to government financial aid worth 1.13 trillion won.

However, in just three months, it lost 0.15 percentage points to fall below the 10 percent limit.

KDB itself isn’t doing too well, either. KDB’s BIS ratio barely hung on to the 14 percent mark, at 14.02 percent in the first quarter. Local banks’ average BIS ratio was 14.6 percent.

KDB’s financial support for Korea Eximbank is expected to raise the latter’s BIS ratio by 0.35 percentage points, bringing it back into the 10 percent range.

Analysts raised concerns that STX Offshore & Shipbuilding’s filing for court receivership last Friday will likely raise the credit risks of the state-run banks as well as NH Nonghyup, which is one of the largest lenders of the shipping companies and shipbuilders.

“There is a risk that bank credit charges, particularly for state-run banks, may rise significantly if creditor-led restructurings proceed to court receivership,” said Sophia Lee, vice president and senior credit officer at Moody’s Investors Service based in Hong Kong.

The local banking sector’s exposure to shipping and shipbuilding was estimated to be between 5 to 6 percent of total credits as of last year, and the restructurings are expected to bring down the three banks’ BIS ratios by as much as 0.5 percentage points.

KDB and Korea Eximbank have put aside about 16.67 trillion won for bad debts as of the end of last year, a lot larger than regular commercial banks’ 14.86 trillion won, according to FSS data.