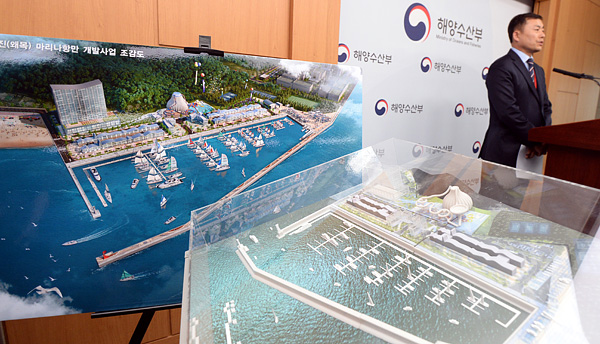 Cho In-bae, CEO of Liodi Korea, explains on the marina development plan in Dangjin, South Chungcheong, held at the Korean Ministry of Oceans and Fisheries in Sejong on Monday. [NEWSIS]

A marina project featuring a dock for yachts in Dangjin, South Chungcheong, which had been on hold due to a lack of investment, has found new financing from a Chinese investor.

This is the first time that a foreign investor has taken part in a development project related to Korea’s yacht tourism industry.

The investors seem to be planning to turn the region into a new center for tourism in North Asia by connecting Dangjin with China’s own Qingdao, which has become the center of that country’s yacht industry.

According to the Ministry of Oceans and Fisheries on Monday, China’s state-run Liodi Group has submitted a plan to invest 114.8 billion won ($96 million) in developing the port in Waemok, Dangjin.

The Chinese company, which specializes in mining excavation and property development, opened up a branch office in Korea late last year and started construction on an officetel in Gwangmyeong, Gyeonggi.

Liodi Group plans to create a yacht port covering 170,000 square meters and harboring some 300 yachts. In the first stage, the Chinese company plans to build seawalls, a facility where yachts can dock and a club house.

The Chinese investor will then inject 95.9 billion won for the second stage of construction, which will cover lodging facilities as well as leisure and commercial buildings.

The marina is expected to generate an economic impact of 430 billion won and create jobs for 2,878 people.

Qingdao is roughly 600 kilometers from Dangjin and has one of the world’s largest harbors, capable of docking 1,000 yachts.

The Korean government has been trying to boost the marine tourism industry by licensing the construction of nine marinas where yacht docks could be built since 2013. But other than Hupohang port in Uljin, on which construction is expected to begin in July, all have struggled to attract investors.