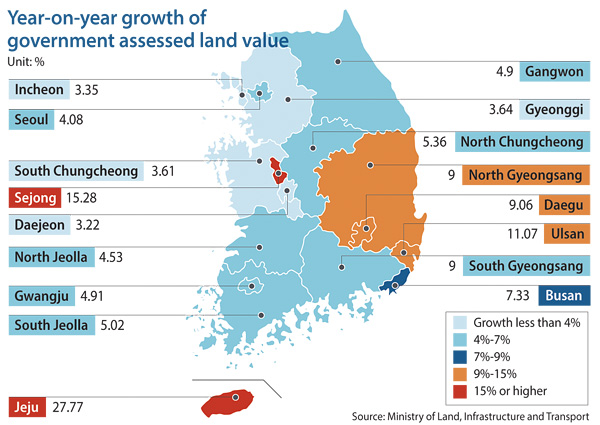 The value of all assessed land in Korea rose 5.08 percent compared to a year ago, and the Nature Republic store in Myeong-dong, central Seoul, maintained its title as the most expensive plot for the 13th consecutive year.

According to the Ministry of Land, Infrastructure and Transport on Monday, the average assessed value of 32.3 million plots of land throughout the country reported the sharpest growth since 2008, when it surged 10.5 percent. The growth was even higher than last year’s 4.63 percent.

The government said Seoul saw slower growth because of lack of development or postponed development, including projects in the western area of Gyeonggi such as Ilsan and Deokyang District, Goyang.

Jeju saw the sharpest increase nationally, as its land value surged 27.77 percent compared to a year ago. In Sejong, the rise was 15.28 percent. Ulsan prices went up 11.07 percent, while Daegu prices rose 9 percent.

Jeju land prices surged due to ongoing urban development projects as well as inflows of foreign investment. Sejong land prices went up because of its continued construction as the country’s administrative capital.

Daejeon showed the slowest growth among major cities at 3.22 percent.

Narrowing in on smaller cities and districts, Jeju City and Seogwipo - both on Jeju Island - reported the sharpest increases of 28.79 percent and 26.19 percent, respectively. Haeundae in Busan followed in third with a 17.75 percent increase, while Dong District, Ulsan, came in fourth with 17.04 percent and Yecheon County, North Gyeongsang, was fifth at 16.38 percent.

The most expensive lot in the country was Nature Republic’s 169.3 square meters in Myeong-dong. Each square meter was worth 83.1 million won, nearly 3 percent higher than last year. The lot’s total worth is 14 billion won.