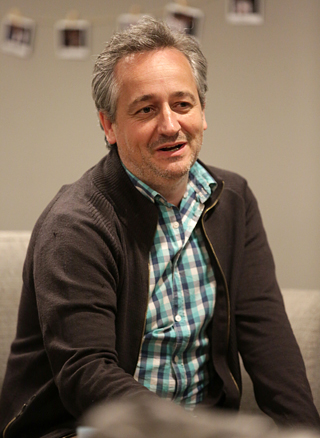 French filmmaker Paul Lacoste has always been a food enthusiast, so much so that he even learned to cook professionally.

His deep interest in the area eventually led him to make a film about it, and not just one but a whole nine-part series on talented chefs based in France.

One of these is a documentary titled “Step Up to the Plate” (2012), which follows perfectionist chef Michel Bras, who is planning to retire and hand over his three-Michelin-star restaurant to his equally talented son, Sebastian.

The film was invited to this year’s Seoul International Food Film Festival, which is taking place at the Megabox in COEX in Samseong-dong, southern Seoul, through today.

“Like people fall for ‘Iron Man’ and become its fans, I was a fan of gourmet,” Lacoste said in a recent interview with the Korea JoongAng Daily. “I have always wanted to show something through it and thought the Bras family was a perfect model to do that.”

After spending over a year observing and filming the father-son duo, he realized that it takes more than just cooking skills to become an owner-chef of such a prestigious restaurant, where the 30-or-so tables are consistently fully booked despite its isolated location in rural southern France.

“I picked three traits that helped Michel to maintain the position: creativity, entrepreneurship and perfect technique,” he said. 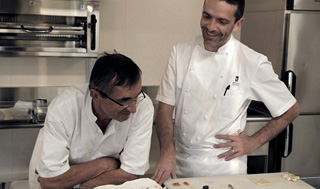 “Step Up to the Plate” zooms in on the dynamic between Michel Bras, left, and his son Sebastian as he prepares to take over his father’s three-Michelin-star restaurant. [SEOUL INTERNATIONAL FOOD FILM FESTIVAL]

Staying faithful to what a food documentary should be, “Step Up to the Plate” features a number of sleek close-up scenes of both Michel and Sebastian creating their high-end dishes, which utilize dozens of ingredients, including flowers and milk skin.

However, what takes center stage in the 86-minute feature is the tension between the father and son, as they clash over the change in leadership.

“Sebastian was in a very difficult situation, which might ring a bell with every son out there who has a famous father, trying to fill in the big shoes … but he is handling it very well now,” the director said. “I have been to the place a few years ago, and Michel didn’t even know what I ate at the restaurant, which means that Sebastian has finally become independent.”

As a symbol of fine dining as well as the director’s homeland, France is home to more than 600 Michelin-star restaurants, while Korea is just beginning to pick up on the haute cuisine trend.

“I’ve only experienced very general Korean food in Paris,” Lacoste said. “However, what should be cautioned against when trying to obtain a Michelin star is that you should never try to imitate other food, such as Italian or French. That is what curtails more potential lying underneath.”

With that in mind, Lacoste added that maybe it is time to make a food-related movie on Korea, since the domestic gourmet scene is now beginning to expand.