Ban reacts with surprise at brouhaha he sparked

Ban reacts with surprise at brouhaha he sparked 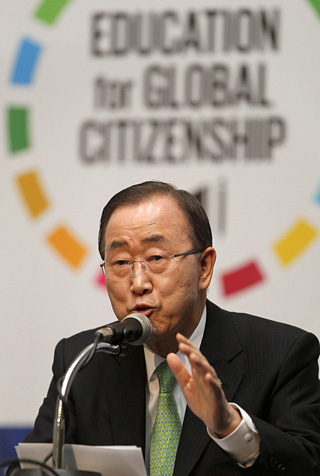 United Nations Secretary General Ban Ki-moon on Monday asked Koreans to refrain from making “wild speculations” about him making a run for the presidency.

Ban, however, did not rule out the possibility of a presidential bid.

“I am baffled by the exaggerated interpretation of my remarks made in a closed-door meeting at the Kwanhun Club [last week],” Ban said during a press conference in Gyeongju, North Gyeongsang.

“I will appreciate if people refrain from making wild interpretations or speculation over my activities in the country. … I hope there will be no misunderstanding regarding news reports on my schedule here in Korea.”

On his post-retirement plans, Ban said it was up to him to decide what to do, and that he was the best person to decide his future.

Aware of the intense interest his trip to Korea has sparked, Ban denied there were any political elements attached to his visit. He said he had made the visit on behalf of the UN without any other agenda. He asked the public to help him fulfill his second five-year term at the United Nations, which concludes at the end of this year.

The 71-year-old UN chief’s remarks last week and his meetings with retired politicians were seen as an unambiguous signal of his intention to run, probably for the conservative Saenuri Party.

One of Ban’s meetings was with two-time former Prime Minister Kim Jong-pil on Saturday. Kim fanned the speculation by telling reporters the two had a “secret talk.”

In a poll conducted on Friday and Saturday, Ban led all potential presidential contenders, defeating Moon Jae-in of the Minjoo Party of Korea 28.4 percent to 16.2 percent.

Ahn Cheol-soo, co-leader of the People’s Party, came in third with 11.9 percent. Respondents were asked who they would like to see as Korea’s next president.

Ban’s rise to the top of the poll came with some instant backlash from politicians.

Rep. Lee Jong-kul, former floor leader of the liberal Minjoo Party, warned Ban on Sunday that “his name will be thrown into the gutter by the Korean people if he becomes president” and likened him to “a disaster.”

Lee apologized Monday for the rough language, but maintained that Ban’s attempt to raise his profile as a presidential contender would not only taint the nation’s honor but also his.

Some critics have said it is inappropriate for a former UN secretary general to run for the presidency.

They cite UN resolutions that ask a secretary general to refrain from taking a government position after retirement because a UN chief is a “confidant of many governments.”

After causing an upheaval in the political arena, Ban left for New York on Monday, following an appearance at the UN Department of Public Information/Non-Government Organizations Conference, which has drawn some 2,000 nongovernmental organization officials, scholars and experts around the world to the historical city of Gyeongju in North Gyeongsang.

The UN conference of nongovernmental organizations is underway with the theme of “Education for Global Citizenship: Achieving the Sustainable Development Goals (SDGs) Together” and will run through Wednesday.