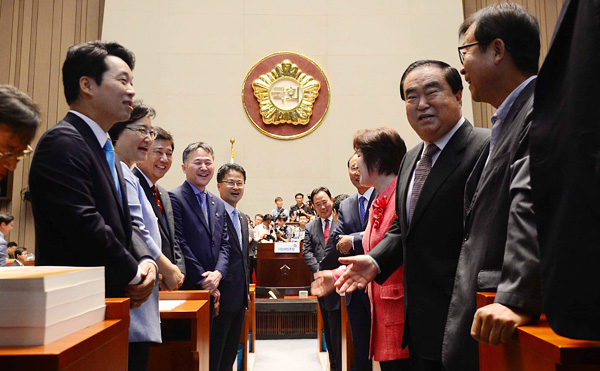 Leaders of the Minjoo Party of Korea greet lawmakers for a meeting inside a conference hall on Monday, the first day of the 20th National Assembly. [NEWSIS]

The 20th National Assembly commenced its new term on Monday, inaugurating a three-party system for the first time in 16 years.

Through the April 13 general election, 300 lawmakers were elected. The Saenuri Party, to which President Park Geun-hye belongs, won 122 seats, making it the second largest party in the legislature, while the Minjoo Party of Korea became the largest party with 123 seats, the People’s Party won 38 seats, the Justice Party six and independents 11. The three largest parties formed negotiation blocs, bringing back the three-party system in the National Assembly, as they each won more than 20 seats.

The three main parties each held leadership meetings and lawmakers’ assemblies on Monday to mark the start of the four-year term. They also held a negotiation in the afternoon to complete the formation of the National Assembly to elect the new speaker and standing committee chairmen.

Floor leaders of the three parties-Saenuri’s Chung Jin-suk, Minjoo’s Woo Sang-ho and People’s Park Jie-won-agreed on May 19 that they should complete the formation before the statutory deadline. No progress, however, has been seen since then.

According to the National Assembly Act, an extraordinary session is supposed to start on June 5, the seventh day of the lawmakers’ new term. Because June 5 is Sunday and June 6 is Memorial Day, the first plenary session will begin on June 7.

An election of the new speaker and vice speakers is scheduled on June 7. Also that day, the opening ceremony will take place. A presidential speech is also customary at the ceremony.

If all the processes go as scheduled, formation of the standing committees will be approved on June 9 when the second plenary session takes place.

The three parties are still having a negotiation to complete the process. They roughly agreed that the Minjoo Party will produce a speaker, while the Saenuri will chair 8 of the 18 committees, the Minjoo another eight and the People’s Party two.

While Minjoo’s floor leader, Woo, said the negotiation should be done within two to three days, the Saenuri Party said the other parties are making some difficult demands. It remains to be seen if the new National Assembly will launch in time, as the negotiation showed slow progress. Since the 13th National Assembly, the legislature has never started its operation on time because the parties involved have repeatedly failed to agree on who will chair standing committees.

President Park on Monday sent a message to the National Assembly urging it to work hard by making sacrifices for the sake of the people.

It remains to be seen if the Minjoo-controlled legislature will maintain a smooth relationship with the Park administration. During her trip to Africa, Park vetoed Friday a bill to enable the standing committees to hold hearing around the year whenever necessary, instantly freezing relations between the Blue House and the National Assembly.

The Minjoo Party and the People’s Party both held meetings on Monday and condemned Park for exercising the veto in the final days of the previous National Assembly. Legal opinions were split about as to whether the new National Assembly would be able to override the veto since the bill was proposed, passed and turned down during the tenure of the last legislature.