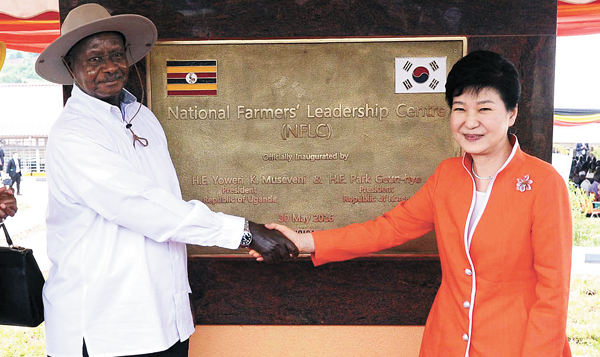 Uganda said Sunday that it will cut all security and military cooperation with its longtime ally North Korea, a victory in the South’s diplomatic effort to isolate Pyongyang and curb its nuclear and missile programs.

Uganda is one of the few allies of the isolated North. After taking office in 1986, Museveni visited North Korea in 1987, 1990 and 1992 and met with Kim Il Sung, the North’s late founder and grandfather of the current ruler Kim Jong-un.

Park was the first South Korean president to visit Uganda since the two countries established diplomatic ties in 1963.

At the summit, Park requested Museveni to join the international community’s efforts to end North Korea’s nuclear program, saying it not only threatens the Korean Peninsula but also the entire world.

Museveni vowed to faithfully implement UN resolutions and ordered his government to “disengage” all security, military and police ties with the North, Kim said.

UN Security Council resolutions, imposed after the North’s fourth nuclear test in January, bar the country from having any military links with foreign countries, including weapons trade and training deals. The South Korean government, however, said about 50 North Korean military and policy training officials were staying in Uganda as of February 2016.

A UN Panel of Experts report submitted to the UN Security Council on Feb. 24, 2016, also confirmed that Uganda until recently had police and military cooperation with the North. According to the report, Uganda confirmed that until last December, North Korea provided training for 45 of its police officers, including 19 security instructors for paramilitary police.

Blue House sources said the North Korean trainers were believed to be ordered to leave at the order of Museveni.

“It is a major accomplishment of the summit that Uganda, which had long been a close partner of the North, changed its attitude to support us,” Kim said. “Uganda’s shift will also encourage other African countries to implement UN resolutions.”

Meanwhile, a minor hiccup occurred after the summit. After South Korea announced that Museveni ordered the cutting of security and military ties with the North, AFP reported that Ugandan authorities denied it.

“That is not true. It is propaganda,” deputy government spokesman Shaban Bantariza told AFP. “Even if [such an order] was to be made by the president, it cannot be public. It cannot be therefore true and it can’t happen. That is international politics at play.”

But Ugandan Foreign Minister Sam Kutesa confirmed Monday that the country decided to sever all military ties with the North.

“We disengaged cooperation we are having with North Korea as a result of UN sanctions,” he said in an interview with Uganda’s NBS Television. He also said the North’s nuclear development is in violation of the Nuclear Nonproliferation Treaty.