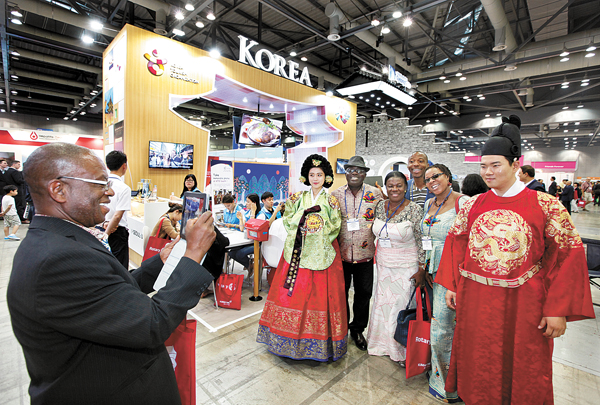 Visitors to the 2016 Rotary International Seoul Convention have had a chance to familiarize themselves with Korean culture at the “House of Friendship,” a booth at Kintex in Goyang, Gyeonggi, where the convention has been held since Saturday.

For those who have limited time to explore many little towns and museums outside of Gyeonggi, the Ministry of Culture, Sports and Tourism and the Korea Tourism Organization have run a booth with a gate shaped like a hanok, or traditional Korean home.

At the booth, set up to introduce Korean culture to the 25,000 foreigners visiting from 160 different countries, travelers can try on hanbok, or traditional Korean clothing, and write calligraphy. Visitors can also learn about herbal medicine and acupuncture, which have been developed in Korea for centuries, and sample various herbal teas.

In preparation for the 2018 Pyeongchang Winter Olympics, visitors will get to glimpse some of what awaits them if they decide to return for the event in two years.

Also on display are different types of tables and table settings widely used in Korea in ancient times, and old books that explain the benefits of eating seasonal ingredients indigenous to Korea. For those who want to see what’s popular in modern Korea, visitors can also get discounted tickets to some popular non-verbal shows.

The Korea Tourism Organization has offered 25 official tour programs for those visiting the international convention with their partners and families.

It is also offering tours to the demilitarized zone (DMZ), as well as designated Unesco heritage sites Jeonju and Jeju Island, which have been exceptionally popular.

To inspire more youngsters to get excited about Korean culture, the state-run company also executed a program where about 1,000 participants between the ages of 19 and 35 can learn how to serve tea and follow proper etiquette in various situations.