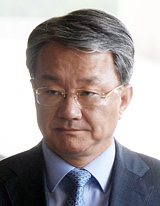 Prosecutors sought a detention warrant against Hong Man-pyo, once an influential prosecutor and now a lawyer, on charges of tax evasion and illegally accepting cases.

Hong was summoned on Friday to the Seoul Central District Prosecutors’ Office not as a lawyer but as a criminal suspect, at the very office where he used to work. Following a 17-hour investigation, prosecutors added more to Hong’s initial list of charges.

According to the prosecution, they are charging the lawyer with accepting 300 million won ($252,000) from Nature Republic CEO Jung Woon-ho to ask prosecutors for favorable ruling on the defendant’s illegal gambling case. Hong’s client, Jeong, was indicted three times for gambling abroad but was found not guilty in the first two trials and, after being sentenced to one year in prison in the third trial, his sentence had been shortened to eight months in an appeal court last month.

The rulings raised questions as to whether Hong lobbied public officials, including one judge, in order to turn the verdict in his client’s favor.

Other than the previously charged 300 million won illegal fee, Hong was also charged with having accepted 200 million won from Jeong in 2011 to allegedly bribe Seoul Metro officials to streamline the launching of Nature Republic stores in subway stations. This was less than a month after his resignation as prosecutor. Accepting money for associating with prosecutors or judges is a violation of the Attorney-at-Law Act, and those found guilty can face up to five years in prison and fines of up to 30 million won.

Hong was also accused of not fulfilling his income tax duty by reducing his accepted legal service fee on paper and completely omitting some of them. He is said to have maintained these practices since September 2011. Prosecutors suspect Hong’s unreported income allegedly amounts to some 3 billion won, and therefore his evaded taxes total around 1 billion won. Reportedly, the lawyer mostly admitted his guilt with regard to tax evasion during the 17-hour investigation on Friday. It was found by the prosecution that Hong’s profit from tax evasion was used to invest in his managed real-estate business.

According to the prosecution, if Hong accepted a commission fee of 350 million won for introducing the case of Lim Suk, Solomon Savings Bank chairman, to his fellow lawyer, this could be considered a breach of the Attorneys-at-Law Act.

As a prosecutor, Hong handled many high-profile cases, including investigations into slush funds held by former presidents Chun Doo Hwan and Roh Tae-woo, and the scandal involving former Seoul National University professor Hwang Woo-suk’s falsified stem cell research. Since his resignation, Hong has worked as a lawyer with his own legal practice.