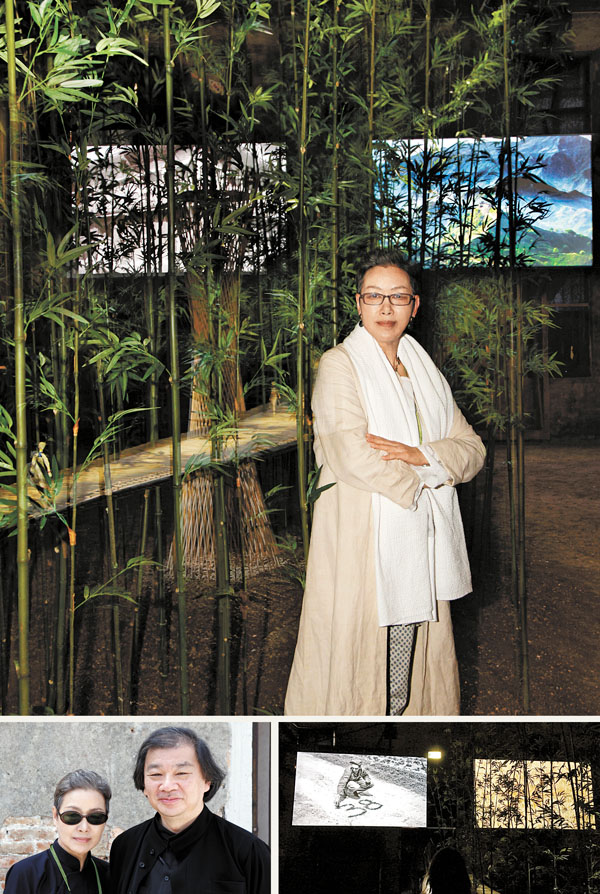 Top: Korean artist Jae-eun Choi is participating as one of the main exhibitors at this year’s Venice Architecture Biennale with her work “Dreaming of Earth.” Left: World-renowned Japanese architect Shigeru Ban, right, collaborated with Choi on the project. Above: Two 20-minute videos installed in the exhibition each screen photographs detailing the history behind the DMZ and the living creatures that are currently thriving in the area. [KUKJE GALLERY, YIM SEUNG-HYE]

VENICE - It’s not easy to spend a long time to read all the details and look at everything that’s on display at an exhibit, especially when the subject is architecture and the actual buildings and projects are somewhere else so all you see are the representations in model form.

But that wasn’t a problem for Korean artist Jae-eun Choi, who is exhibiting her work titled “Dreaming of Earth” at the Arsenale, the main exhibition venue for this year’s Venice Architecture Biennale that kicked off on Saturday.

The location of Choi’s exhibit - the last room at the very far end of the venue - may be a downside for visitors who just zip through, feeling fatigued after passing through dozens of other exhibits before hers, but most who stepped into her soil-covered exhibition room didn’t quickly leave again. Choi says she “personally brought in the soil for the exhibition floor in an attempt to allow visitors feel like they are really out in nature, in the demilitarized zone.”

Choi’s “Dreaming of Earth” project includes an architectural scale model of an elevated bridge made using of bamboo that is proposed to be built in the demilitarized zone (DMZ) in Cheorwon County, Gangwon, which is not only an area with thousands of land mines but also a home to more than 5,000 species including 106 endangered ones.

Along with the 1/200 scale model of the bamboo bridge, Choi’s exhibition is screening two videos on the wall of the darkened room. The left screen displays black-and-white photographs with English captions telling the history of Korea from the Russo-Japanese War in 1909 up to how DMZ was established in 1953. The right screen, in contrast, shows bright, colorful photos of animals, insects and plants that inhabit the DMZ, taken by the handful of authorized photographers who are allowed into the DMZ. Both videos run for about 20 minutes.

“I always knew about the heart-rending history behind the DMZ and the two Koreas but never thought about all the natural ecosystems that have been preserved intact for the last 60 years in this untouched area,” said Erik Helgoy, 59, a visitor from Norway on Saturday, as he was gazing at the two video screens for the whole 20 minutes.

“I’ve never spent so much time on one exhibition hall. Standing on this dirt in this dark room while listening to the sounds of nature coming from the speakers, it was certainly a unique and quite a different experience. I really hope to walk on this bamboo bridge in DMZ in the near future.”

For this year’s 15th edition of the Venice Architecture Biennale, the Director Alejandro Aravena of Chile proposed the theme “Reporting from the Front,” saying he wants to raise the question of how architecture can address actual daily human needs on the “social, political, economic and environmental end of the spectrum.”

Although Choi’s long-term DMZ project began five years ago, it fell right into the theme so her work was invited to be featured as one of the main exhibitions for the event.

Choi became the second Korean to exhibit her work at the event independently after Korean architect Seung H-sang in 2012, and she has also joined the ranks of those who have participated in both the art and architecture biennales in Venice. In 1995, she was one of the participating artists in the Japanese Pavilion of the art event.

For the 63-year-old artist who’s been actively working in Japan, Germany and Korea, the strip of land stretching about 250 kilometers from west to east across the Korean Peninsula and 2 kilometers each to the north and south from the 38th parallel, or the Military Demarcation Line, is not just a land of pain and agony that resulted from the torment of war, but also a “land of hope.”

“There are said to have been about 3 million land mines that were laid or lost over decades in this area,” said Choi. “But at the same time, this land has become an invaluable place for living creatures that have managed to thrive in their own ways for more than 60 years.”

Believing that this rich ecosystem can be the starting point for the two Koreas to take a step closer toward unification, Choi delved into her latest work of designing a 13-kilometer (8-mile) bridge that will be built 3 to 6 meters above ground inside the DMZ. To realize this project, she asked for help from her longtime friend and world-renowned Japanese architect, Shigeru Ban.

“I instantly thought there’s no other architect among those I know than Shigeru Ban who would be more befitting to this DMZ project. So I called him about two years ago and asked him to join me in this project,” said Choi.

Ban, who won the Prizker Architecture Prize in 2014, is known for his humanitarian works using natural materials such as paper and bamboo.

Ban has been working with Choi on realizing this “dream of Earth” ever since. However, Ban said that “this project is not and it should not be an architectural project.”

“The architectural form of the bridge is not important, so this is not really an architectural project,” Ban explained. “This is more of a philosophical project and all I did was to give the function to realize her idea.”

He added that is perhaps why the director Aravena expressed that he was pleased with their work.

“This year’s theme is a bit abstract,” said Ban. “I don’t think Aravena was looking for very architectural solutions when he raised the question, and I think our project is not very architectural, so I think that was the kind of answer that he was expecting and hoping to see.”

When asking Ban for help, Choi said she only had two conditions: that the bridge should be raised above ground so that it protects people from the land mines as well as protecting the ecosystem from being damaged, and that the construction should become a part of the natural ecosystem.

Ban said he suggested that Choi use bamboo as the main material for the bridge, since he believes that “only natural material like bamboo is suitable for a bridge that’s being built to foster reconciliation and reunification between the two countries, not to mention protecting the ecosystem that’s thriving in the area.”

“Choi was already familiar with the material, so she understood quickly that bamboo can be a very strong structure for a bridge,” he added, “not to mention having the advantage of growing very fast.”

In the 1990s, Choi gave a modern touch to the red-brick Kyungdong Presbyterian Church designed by notable architect Kim Swoo-geun in Jangchung-dong, central Seoul, by installing 3,000 bamboo trees on top of the building. Although it has since been taken down, this installation work, titled “Synchronous,” is still remembered as one of Choi’s representative works.

Having been one of the early Korean artists to study and work in Japan and Germany, Choi says she was able to develop an “objective patriotism” toward Korea.

“The DMZ is such a complicated area when we approach it politically,” said Choi. “As an artist, I believe it’s better to approach it in the simplest way, and that was through nature.”

“It’s so ironic but through the DMZ, we’ve been gifted with such a beautiful heaven where all sorts of creatures inhabit,” she continued. “It should be shared with the world. I and Ban both hope that this ‘Dreaming of Earth’ bridge turns into an ecological park where tourists from across the world can visit.”

The “Dream of Earth” plans consist of 13 floating gardens, an observatory, a seed preservation bank was well as a library along the 13-kilometer bridge, which is surrounded by tall bamboo trees.

“We transplanted 10 bamboo trees from Damyang to Suwon in April to make sure bamboo trees can adapt and survive in other soil as well,” said Choi. Damyang County in South Jeolla is known for its bamboo forest. After a year, Choi said they will transplant the trees in steps toward Cheorwon to make sure they can survive farther north.

“This project requires a lot of time and a tremendous amount of effort,” Choi said. “Bamboo trees may not survive when they are suddenly planted in Cheorwon, where it’s colder than Damyang. That’s why such a slow process and close monitoring by experts are crucial.”

Although some are concerned that the bamboo won’t be able to survive in Gangwon, Ban said that he’s already met with experts who say it’s possible.

Choi says this will not be a one-time show or a project that only involves the mere construction of a bridge in DMZ. The plan also includes establishing a seed bank, studying the ecosystem of the area and restoring the Gungye City Wall, which is within the area.

In fact, the reason why the artist picked Cheorwon as the location to establish her “Dreaming of Earth” bridge goes a bit beyond the mere fact that it’s in the heart of the DMZ.

“When I was looking down on the DMZ in Cheorwon, I not only saw the beautiful nature but the Gungye City Wall, which symbolizes the reunification of the two Koreas” she said. According to Choi, King Gungye (857-918), who later founded the Goguryeo Kingdom, chose this site to establish “Daedongbangguk,” which means “Great Eastern Kingdom.”

“It was his vision to create an ideal community, and in that sense I believe the area has such a great significance,” she said.

“We don’t know if or when it can be realized,” she said. “But I believe we should be prepared because trying to put this all together after the reunification will be too late.”