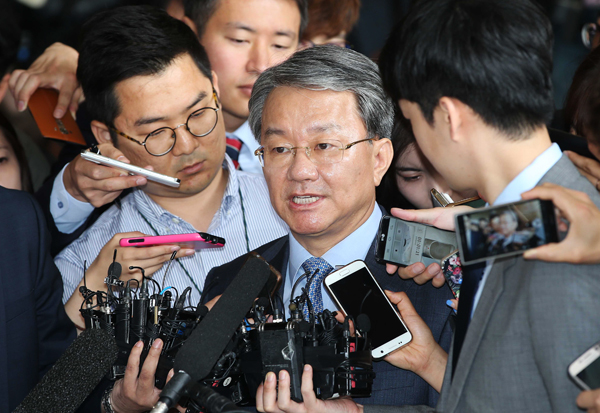 Hong Man-pyo, a prosecutor-turned-lawyer, speaks to reporters on Monday after being summoned by the Seoul Central District Prosecutors’ Office for questioning on illegal influence peddling. [OH JONG-TAEK]

There is a 26-year-old part-timer in the editorial office I work at who is in from three to nine every day. His second job is at a hamburger shop in Itaewon, central Seoul, where he works from 10 p.m. to 6:30 a.m. He dropped out of a local university and dreams of starting his own shop after saving up 50 million won ($42,000). He will have to work day and night for two to three more years to earn that kind of money.

But corrupt lawyers like Hong Man-pyo and Choi Yoo-jeong earned double that amount by making one phone call.

The two cannot be forgiven, not just because they own over 100 office buildings and pocket more than 10 billion won a year in legal fees. Their riches were built upon abusing the knowledge and influence they acquired while serving the public in the prosecution and on court benches.

Former star prosecutor Hong ran a real estate business to avoid taxes. He reinvested in real estate properties and pocketed rent income in the millions. This is a form of money laundering that Hong must have learned during his service in the special investigation team, one prosecutor-turned-lawyer said.

Choi, who used to be a senior judge, also made the most of her expertise on the bench to profit from bending the law. When officials from the Financial Supervisory Service raided an investment consultancy firm she represented in August 2015, she filed damage charges against them, claiming she incurred losses from the disruption to her business, and won the suit. She knew individuals cannot be protected in court regardless of how powerful their workplace is. Her legal earnings worth 5 billion won mostly came from scammers.

Both promised to serve the people and uphold justice when they were sworn in to public office. Upon retirement, their private legal business flourished by flaunting their image as an expert on special investigations and a book-loving judge.

But the list of real estate and private bank accounts portray their true color. And that is the color of money no matter how it’s earned.

The public’s intuition is usually right. What is referred to as a special investigation often ends in bargains made or deals clinched.

Prosecutors uncover five or six accounts through their rummaging and crack down on the suspect for two or three accounts if he or she cooperates with the investigation. Lawyers who know the mechanism through their service in high places in the prosecution make a few rounds of calls to their former colleagues and cut deals for their clients.

Jung Woon-ho, chief executive of Nature Republic, was indicted three times for illegal gambling abroad. He was let off by prosecutors twice and his sentence was shortened once. Prosecutors also left his bail request up to a judge. They claim they could not find sufficient evidence, but the public is not fooled. Hong said he would take responsibility if he needs to upon being summoned by the prosecution for illegal practices, suggesting that there had been illegal deals involved. Clandestine business arrangements don’t seem to be affected by a prosecution probe.

The criminal court where Choi learned her tricks is more or less the same. Since an investigation acts as a first trial, judges must make preliminary judgments primarily on the investigation records. The truth often becomes hidden and distorted in court. The odds of winning in court become better simply by recruiting a former judge. The practice will continue unless the supply chain is cut off. Revolving-door practices among law practitioners are therefore more than abuse of power, but outright criminal acts.

They have abused and distorted the law through their knowledge of and access to the judiciary system. For those who strive to make enough money to get by or are forced to close down a business because of outstanding debt of just a few thousand, judiciary justice is a bad joke. The storming of the Bastille in Paris, which represented the excesses of the French nobility, was the flash-point for the French Revolution. If people cannot trust prosecutors and judges to defend justice, they will have to hit the streets to stand up for their rights. That is the sad consequence I dread most.