Industry struggles, but exports are rising

Industry struggles, but exports are rising 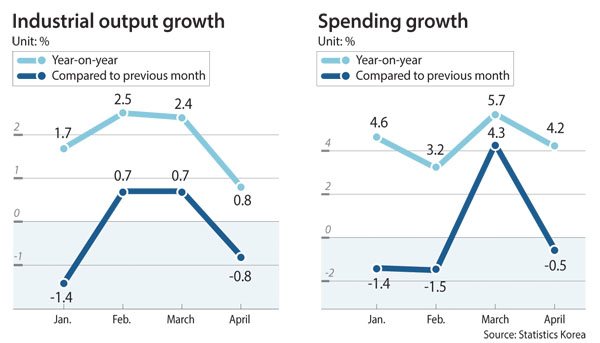 Industrial output, which showed signs of recovery earlier this year, struggled in April, largely due to the weak shipbuilding and automobile industries.

This is the first time that industrial output has retreated since January, when it fell 1.4 percent compared to the previous month. Output seemed to be in a recovery in February and in March as it grew 0.7 percent each month.

Industrial output suffered from weak performances in mining and manufacturing, which fell 1.3 percent compared to the previous month. This is the second consecutive monthly decline. In March, it fell 1.3 percent.

“Production for the mining and manufacturing industries was notably weak in April,” said Kim Kwang-seop, a director general at Statistics Korea. “Automobile production fell 4.3 percent, while other transportation equipment tumbled 12 percent due to slowing exports and shrinking orders for ships.”

But consumers are starting to cut back on spending. Consumption in April grew 4.2 percent when compared to a year earlier, but when compared to the previous month, it fell 0.5 percent. This was a sharp turnaround from March’s 4.3 percent growth.

However, the government cautioned against excessive gloom.

“Consumption did fall from the previous month, but one has to understand that retail sales in March rose 4.3 percent from February, the most in 85 months,” said Yoon In-dae, a director at the Ministry of Strategy and Finance. “A 4.2 percent year-on-year growth rate does suggest that we are keeping up the momentum.”

May’s consumption is likely to rise thanks to the government’s decision to extend holidays earlier last month. This year’s Children’s Day fell on a May 5, a Thursday. To boost domestic spending, the government designated the following day, Friday, May 6, a temporary holiday, giving many people a four-day weekend.

“We expect the economic data for May will continue to get better as exports are improving,” Yoon said. “Furthermore, government decisions such as reintroducing lower rates on individual consumption taxes to boost the domestic market and designating a temporary holiday during the Children’s Day weekend will have a positive impact as well.”

According to the Finance Ministry, Korea’s exports, which have contracted for 16 straight months, might have a chance to rebound in May. In April, exports dropped 11.2 percent year on year, but the ministry said they grew by 2.1 percent as of May 20.

Furthermore, the ministry said domestic sales for automobiles in Korea are expected to grow 20 percent year on year in May, a sharp increase from 5.8 percent in April.

Meanwhile, a Bank of Korea report showed Tuesday that a 10 percent rise in financing costs for households, such as larger loan payments, would lead to a 0.22 percent drop in the country’s industrial output.

The report on correlations between the financial sector and the real economy found that households’ interest payments for loans and other financial costs would impact the real economy and curb increases in industrial production and consumption.

“If interest payments and repayments of principal serve as constraints on consumer spending, it can have a negative impact on production by industries,” said Kim Kyung-seob, the author of the report.

According to a joint survey by the Bank of Korea and Financial Supervisory Service of household finance and welfare conditions in 2015, loan repayments account for as much as 24.2 percent of the average disposable income of households.