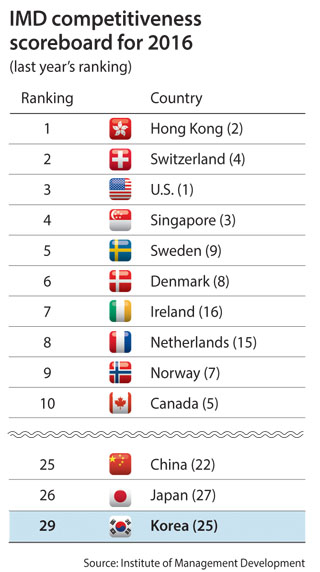 Korea’s global competitiveness fell by four notches to 29th in the Institute for Management Development (IMD)’s World Competitiveness Yearbook for 2016, as the country showed more weakness in areas including business efficiency and economic performance.

Korea’s ranking has continued falling for the last three years.

Korea’s ranking for business efficiency fell farthest, from 37th to 48th. Rankings are based on opinion surveys of more than 5,400 business executives around the world.

“Most of the surveys were done after April, and the survey respondents seemed to have given Korea lower scores due to the Oxy humidifier sterilizer scandal and ongoing restructuring of debt-ridden companies,” Hong Min-seok, a director at the Ministry of Strategy and Finance, said in a press release. “Additionally, the IMD’s data showed that Korea is still struggling on relations between unions and companies and in managing workers efficiently.”

In terms of economic performance, Korea’s scores fell due to its low economic growth rate and weak employment data.

“The GDP growth rate is expected to fall from 3.3 percent last year to 2.6 percent this year, and the employment growth rate is also estimated to drop from 2.1 percent to 1.3 percent during the same period,” Hong said.

The 2016 edition ranks Hong Kong first and Switzerland second. The United States fell from the top spot to third this year. Japan moved from 27th to 26th, and China ranked 25th.

Overall, 20 out of 30 European countries, including Ireland and the Netherlands, scored higher than they did the previous year, while eight out of 14 Asian nations fell in ranking.

“Asian countries suffered declines, and this was caused by falls in commodity prices, the strong dollar and deterioration of the balance sheets of both private and public sectors,” the IMD said in its press release.

According to the Finance Ministry, the IMD’s recommendations for Korea are very similar to what the government is already working on.

“We will work on restructuring companies and the labor market, create more quality jobs for the youth and reduce some of the regulations to grow our competitiveness,” Hong said. “All of the top 20 countries have business-friendly regulations in their countries, and it is essential for the National Assembly to pass related bills as early as possible.”

The IMD World Competitiveness Center, a research group within IMD business school, has ranked nations on their competitiveness since 1989.