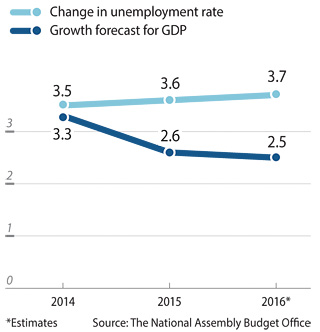 The National Assembly Budget Office (NABO) joined other think tanks in lowering Korea’s economic outlook to 2.5 percent, down 0.5 percentage points from a prediction announced in September.

NABO’s prediction is lower than the 3.1 percent forecast by the government, but similar to the 2.7 percent recently suggested by the International Monetary Fund and the Organization for Economic Cooperation.

“Korea’s economy will only be able to grow by some 2.5 percent this year, due to a slowdown in exports and the weak domestic economy,” NABO said in a report released on Tuesday. “Construction investment will continue to grow this year, while consumption and facility investment will be slow.”

The report added that the year-on-year growth rate for facility investments, or investments in areas such as industrial and mechanical equipment, will only be around 0.7 percent this year, a sharp fall from last year’s 5.3 percent.

Construction investment, on the other hand, will continue to grow as demand for residential buildings is very high, according to the report.

NABO predicted that the growth rate of private consumption will decrease from 2.2 percent last year to 2.1 percent this year.

“People are spending less money due to the weakened economy and consumer sentiment and due to the rise in housing prices,” the report said.

According to NABO, Korea’s exports and imports will both fall 5.6 percent and 7.4 percent in 2016 compared to the previous year, and will record a surplus of some $93.4 billion. “Trade volume in general is expected to decrease due to the slowing global economy, fall in crude prices and oversupply issues,” the report said.

In terms of the labor market, NABO predicted this year’s unemployment rate will grow to 3.7 percent from 2015’s 3.6 percent. And it said only about 310,000 people will be able to find new jobs this year, lower than the 340,000 figure in 2015. “The manufacturing industry will hire less people this year as its exports drop and due to the ongoing restructuring issues for certain companies,” NABO said.

NABO also said the government’s plans to expand work possibilities for young people and women might be able to stabilize the labor market. “The government’s budget for creating jobs rose 12.9 percent year on year to 15.8 trillion won [$13.3 billion] and assigned more money to improving labor conditions. This will have positive impacts in the long run.”