The well-known tale of Simcheong, who sacrificed herself to let her father gain his eyesight, can be enjoyed with traditional Korean dance and the sounds of pansori, or narrative singing. The unique show expresses Simcheong’s joy and sorrow with impressive choreography. See THEATER, below. [NATIONAL THEATER OF KOREA]

To Saturday: The Korean tale of Simcheong, which is a story about a dutiful daughter, has many variations, having been transformed into a ballet piece, opera and films. Now, it is returning in an impressive performance of traditional Korean dance.

The show was choreographed by Kim Mae-ja, a legendary figure who greatly influenced the genre of traditional Korean dance by adopting new styles.

After its world premiere in 2001, the show has been updated to be made even more appealing to contemporary audiences. This year, German director Lukas Hemleb has joined the production team, giving the show a refreshing makeover.

To June 26: With a star-studded cast, this production of the classic musical features K-pop idols Park Hyung-sik, Sandeul and Shinwoo, as well as crossover artist Kai sharing the lead role of d’Artagnan.

To July 24: The musical features the life of American poet and writer Edgar Allan Poe. “The Black Cat,” “The Fall of the House of Usher” and “The Raven” are among his representative works. 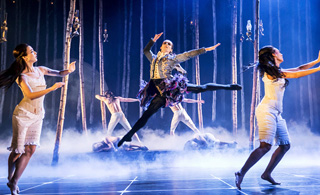 Bourne reinterprets classic ballet pieces - for example, he surprised the audience with muscular male dancers as swans, which contradicts the image of classical ballet. For this piece, he mixes in a vampire story and makes Princess Aurora proactive and vigorous, unlike in the original story.

The upcoming show will star Ryu Jung-han, Um Ki-joon and musical actor Kai as Daniel, one of the lead roles.