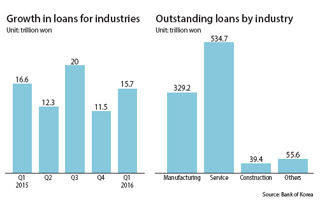 In the midst of the overhaul of the troubled shipbuilding and shipping industries, a report by the Bank of Korea on Tuesday showed a significant increase in loans to corporations in the country, adding to concerns about mounting corporate debt.

Local businesses owed banks and nonbank financial institutions a total of 959 trillion won ($806 billion) as of the first quarter of this year, up 15.7 trillion won or 1.7 percent from the previous quarter, the report said.

Compared to a 1.2 percent increase in the fourth quarter of last year, the rise in corporate loans quickened slightly more for the first three months of 2016. From a year earlier, the figure rose 6.6 percent, the data showed.

About 7.9 trillion won in loans were newly issued to companies for operations during the January-March period, a rebound from a 4.4 trillion won drop in the previous quarter.

Such an increase in borrowing indicates that companies are having financial difficulties as their profitability keeps falling due to declining exports and sales in the domestic market.

Meanwhile, companies borrowed less for facility investment than for operations, the report said.

During the first quarter, local firms took 7.8 trillion won in new loans from financial institutions for investment in facilities and equipment, which nearly halved from 15.9 trillion won in the fourth quarter last year.

By sector, year-on-year growth in loans was noticeable. Borrowing by service firms surged 9.3 percent year on year to 534.7 trillion won as of March, while loans extended to manufacturers amounted to 329.2 trillion won, up 4.2 percent from the same period last year.

Local builders, on the other hand, borrowed less from a year earlier, with total loans dropping 2.7 percent to 39.5 trillion won as of March.

While loans extended by commercial banks managed to rise 8.9 trillion won (1.1 percent from loans issued by banks in the previous quarter) of the total Q1 increase, those by nonbank institutions including second-tier credit companies climbed 6.8 trillion won, or 4.2 percent. Commercial banks lent less in the latest quarter than the previous quarter due to the government’s guidelines to apply stricter screening rules for loans. But nonbank institutions issued more loans to companies than they did in the fourth quarter.