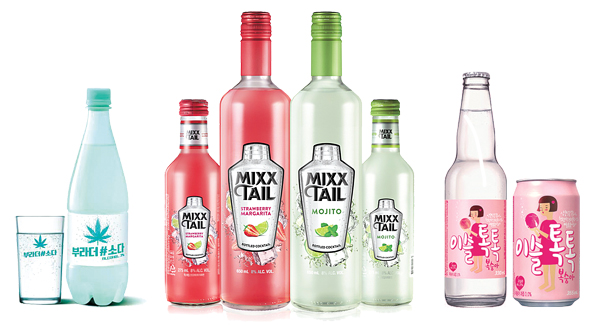 Following the popularity of fruit-flavored soju last year, distillers are continuing to search for novel ways to satisfy the evolving tastes of consumers and target women with a preference for a lighter beverage.

The latest trend involves a mixture of soda and alcohol. Distiller Hite-Jinro is taking the lead by selling over 10 million bottles of Isul Tok Tok in only two months since its launch.

Isul Tok Tok combines soda with peach-flavored white wine, and it has an alcohol content of 3 percent. Because of its low alcohol content, it tastes more like a soda drink than an alcoholic beverage.

“We learned that our female consumers prefer light alcohol, and the addition of soda can deliver a fresh taste,” a representative of Hite-Jinro said. “And peach flavor topped the list among other tastes in our consumer surveys.”

The move coincides with a changing drinking culture where more Koreans are choosing not to consume strong liquor. Today, many drinkers, particularly women, are looking for softer drinks.

“We figured that the packaging design is also important, and the pink color might appeal to women consumers,” the representative said.

The marketing strategy has also stretched to makeup tutorials at trendy areas such as Garosu-gil in Sinsa-dong, southern Seoul.

Bohae Brewery was the first to enter the lighter drink segment with its Brother Soda, introduced last September.

The product has the flavor of soft drinks Ambasa and Milkis, with an alcohol content of 3 percent. Bohae has since introduced various alternative flavors including strawberry and apple.

Other liquor makers are trying to tap into the upswing of sparkling alcohol drinks.

“The popularity of carbonated alcohol drinks is in line with the latest trend of light alcohol,” said Lee Young-eun, a merchandiser at Lotte Mart.

The sales are still small compared to conventional spirits like beer and soju. Sales of Cass beer, the No. 1 beer by Oriental Brewery, average 80,000 a day. About 40,000 bottles of Lotte’s Chum Churum soju are sold on a daily basis.

However, not all liquor makers are fixated on the mixture of soda and wine. Oriental Brewery, the country’s top brewery, came up with a new drink category called brewed cocktail that is based on water extracted from brewed malt. Its MixxTail drink comes in two flavors - strawberry margarita and lime - and contains 8 percent alcohol by volume.