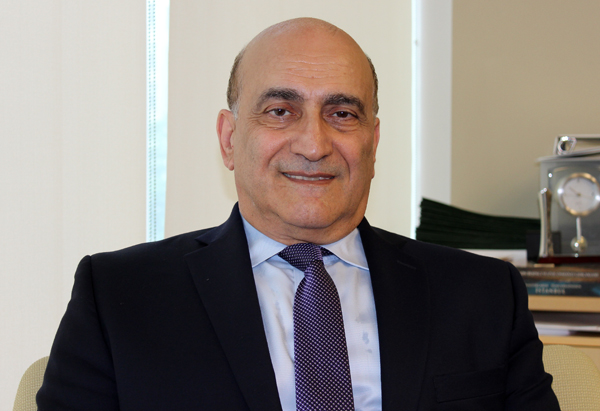 Walid Phares, a top foreign policy and security adviser to Donald Trump, said the U.S. Republican presidential nominee will not call up North Korean leader Kim Jong-un for talks as soon as he is elected.

Rather, Trump will first build “a strong coalition of allies to deter North Korea from any adventurism” and then focus on “engaging China,” Phares said during an interview with the JoongAng Ilbo and JTBC in Washington on Thursday.

Earlier this month, Trump told Reuters, “I would speak to him, I would have no problem speaking to him,” referring to Pyongyang’s Kim.
The interview came after Trump reached the number of delegates needed to clinch the Republican presidential nomination. Phares elaborated on the real-estate mogul’s stance on Washington’s alliance with Seoul, Korea’s development of a nuclear arsenal and other foreign affairs and security-related issues.

Phares, a Lebanese-born scholar and provost at the Washington-based BAU International University, previously served as an adviser to Republican candidate Mitt Romney during his campaign in 2012.


Q. Trump has repeatedly called for the withdrawal of U.S. troops from the Korean Peninsula if South Korea does not pay more.

A. Many of the statements made by Mr. Trump have not been heard since World War II. That is his style, that is his relationship with the American public. That is an expression of some things our public is not happy with, such as our military spending around the world, such as our unlimited help, it’s not just about South Korea or Japan. It’s about around the world. It’s about NATO, it’s about the Arab countries.

But again, all of this goes back to square one. Square one is, he’s a negotiator. He’s going to sit down, he’s going to deal with our partners. These are not the foes, these are the partners, and he, in his style, is always saying the most extreme… But these are theoretical scenarios. Everything indicates that both South Korea and Japan, and the United States on this side of the ocean, need each other. This is not a situation out of context. The context is the threat in North Korea. And as long as that context is there, there needs to be an arrangement between allies.

Trump has called for South Korea to take on 100 percent of the cost of the burden of keeping U.S. troops in South Korea.

As I said for the withdrawal, I’ll say now for the spending. The extreme-case scenario is 100 percent.

But these are numbers, and he’s known to be somebody who negotiates over numbers. So the hope is, once he is in the White House, once he’s updated by his own agencies, remember, he’s moving now to be briefed by the federal agencies, once he’s in transition, if he wins in the fall and once he’s in the administration, he’s going to get a different update, what it is costing us, what would be the situation if such an arrangement won’t work. And then he will adapt and consult with Congress and go forward.


What about his suggestion that South Korea and Japan acquire their own nuclear weapons?

He is not encouraging South Korea and Japan, out of the blue, to build their own nukes. He’s saying if we fail to reach any of these agreements, that’s another form of negotiation. Then, I’ll reconsider payments. Then, I’ll reconsider our strategy against the North Korean threat. That’s an extreme scenario. It all depends on two rational bodies and allies sitting at a table and rediscussing everything, which again, will happen after he’s in the White House and updated about the situation.


Does Trump regard South Korea as an ally?

Yes. Mr. Trump and his team consider the South Korean people and government as allies, and they understand the historical relationship between South Korea and America. This is not from yesterday or last year. We fought together in the Korean War, during the Cold War, shoulder to shoulder, many days, many months. South Korea sent its forces to help the U.S. in Vietnam. South Korea has been helping in every theater when the U.S. needed it, including in Afghanistan and other places. That is a lot of years, many years and many decades of alliances that go beyond business. This is an alliance from people to people. And both South Korea and the United States are confronting a joined threat.


What about renegotiating the Korea-U.S. free trade agreement?

In this area, it’s too early to project because this is not an area of national security. Our forces in Korea, threats of ICBMs [intercontinental ballistic missiles] and North Korean nukes or having South Korea and Japan developing [nuclear weapons], this has to do with national security, so one can do the projections. Everything else, economy, trade, finances, social relations, technology, these are matters where a Trump president would be an expert, a direct expert. So these are matters that he is going to negotiate very seriously about, and this is the matter he’s good at, and your government is good at.


Trump recently said that he would speak to Kim Jong-un. Can you explain what he is suggesting here?

With regard to the statement he made on the North Korean dictator, what he meant by that is, once he achieves his goal… He did not say, “I would meet.” He said, “I would speak with.” So that would leave us with the impression that he wants to establish first a strong coalition of allies to deter North Korea from any adventurism. Then he is going to be engaging China. That is for sure.

We, the United States, have major problems to deal with, and Mr. Trump has made it very clear that on top of his agenda is to clear those issues with China that has to do with our security, with our cybersecurity, with the trade issues, so he said we have major problems with China. Once he sits down with Chinese leadership to resolve these issues, one of the elements he would want the Chinese to help with is North Korea, meaning he wants to see impressive pressure by China, after we resolve our issues with them, on North Korea. If that moves forward, then he’s ready… But that doesn’t mean he’s going to surrender the American position to Pyongyang.


How does Trump perceive the North Korean regime?

Well, Mr. Trump represents a large segment of the American population, which is growing now and hopefully it will give him the keys to the White House. So what he believes is not far from what the American public believes. It is that this is a dangerous regime. It is a regime that is threatening its neighbors, threatening parts of international community, making statements about our national security.

So the obligation of any president — and Mr. Trump said it clearly — “My obligation is to protect the American people.” And if this is a threat, then he will have to engage in eliminating that threat by forming coalitions, by putting pressure, and by asking the Chinese and Russians to also assume their responsibility.


How will a Trump administration respond to a nuclear test or an intercontinental ballistic missile launch by North Korea?


Does this include a military response?

All options are known to be on Donald Trump’s table. He doesn’t want to take off any option. But at the moment, after consulting the military leaders of the Pentagon, the intelligence services, Congress and his allies, both local and international — after all of that’s done — then he will decide what is appropriate.


Trump has emphasized pressuring China to pressure Pyongyang, but what if Beijing retaliates?

A Trump administration is not going to announce what it is going to do… He wants China to resolve it with regard to North Korea. He knows that if the Chinese want it, they can. So when he sits down with them, it’s not going to be for a photo op.