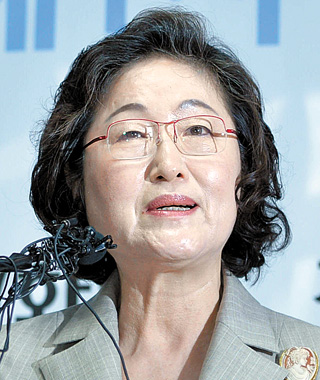 Kim Tae-hyeon, professor emeritus of social welfare at Sungshin Women’s University, was named Tuesday chairwoman of a preparatory committee to set up a foundation for the Korean victims of Japan’s military wartime sexual slavery. [NEWSIS]

A preparatory committee to set up a foundation for the Korean victims of Japan’s military wartime sexual slavery, to be funded by Tokyo, launched on Tuesday in accordance with a bilateral agreement between the two countries made at the end of last year.

Korea’s Ministry of Foreign Affairs and Ministry of Gender Equality and Family announced the committee of 11 members, comprised mostly of civilian experts, and the group convened its first meeting on the same day.

The committee will set up the foundation, to be supported by 1 billion yen ($8.9 million) provided by Tokyo, a crucial step in the implementation of the bilateral agreement to resolve the issues of the Japanese Imperial Army’s forceful recruitment of young women into sexual slavery during World War II.

Kim Tae-hyeon, a professor emeritus in social welfare at Sungshin Women’s University, was named as the committee’s chairwoman. Other members include academics, lawyers and a former foreign minister, Yu Myung-hwan, as well as one senior official from each of the two ministries.

“As a female academic, I have agonized over and played a role in my own way in resolving women’s issues, but this position is a heavier burden than any other before,” Kim said at a press conference held at the National Museum of Korean Contemporary History in Jongno District, central Seoul. “However, time is running out as the average age of the victims is 89.4 years old, and many of them are suffering from diseases.”

Kim, an expert in senior and women’s welfare and former head of the Korea Association of Women’s Studies, might also chair the foundation, under the Korean Gender Equality Ministry, once it is established.

She added that while there are many factors to consider in setting up the foundation, it should be centered on the healing of the survivors and restoring their dignity.

The two countries’ foreign ministries struck a breakthrough deal on Dec. 28 to resolve the comfort women issue, which includes an apology from the Japanese prime minister and a plan to establish a fund for the victims, using 1 billion yen to be taken from Japan’s state budget. The two countries also agreed that the settlement is “final and irreversible,” as long as Japan faithfully follows through with it.

During the press conference, however, Kim described the Japanese fund as “money for healing rather than compensation money,” a stance that departs from the Korean government’s position.

She said, “The Japanese government acknowledged responsibility, which it hasn’t before, and said it will respect the dignity and heal the scars of the victims by paying 10 billion yen, so it is difficult to see this as compensation money.”

Some victims and civic organizations have protested the forming of the foundation, along with the government deal last year. They have criticized the agreement for failing to fully address their grievances, including their desire to see Tokyo take full legal responsibility.

Cho June-hyuck, Foreign Ministry spokesman, described the committee as a work in progress to establish the foundation, which will be tasked with writing up the guidelines of the foundation, setting up an office and other needed preparation measures.

“The preparatory committee will continue to seek the opinions of the victims, and based on this, establish the foundation,” said Cho.