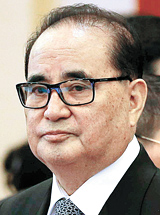 North Korean senior official Ri Su-yong arrived in China on Tuesday, in a surprise visit that hinted at improvement in ties between the two Communist allies after a period of strained relations.

Ri, vice chairman of the central committee of the Workers’ Party of Korea (WPK), arrived at Beijing Capital International Airport around 9:45 a.m. in what many see as an attempt by Pyongyang to improve ties with its major benefactor, which has been strained by nuclear tests.

The visit by Ri, 75, is the first by a senior North Korean official since Pyongyang carried out its fourth nuclear test in January.

While Choe Ryong-hae, now part of the five-member presidium of the political bureau of the WPK’s central committee, visited Beijing last September and met with Chinese President Xi Jinping to observe a military parade to commemorate the end of World War II, he did not have meetings with senior officials to discuss policy issues.

A new party leadership was announced at the seventh congress of the WPK, which was held for the first time in 36 years in early May.

Ri, a former foreign minister, is believed by South Korean intelligence to be mainly handling Pyongyang’s diplomatic affairs following the death of Kang Sok-ju, the chief diplomat who negotiated the short-lived nuclear deal with the United States in 1994. Ri, a French-speaking diplomat, is known as a former guardian of Kim Jong-un and his sister Kim Yo-jong during their studies in Switzerland in the 1990s.

While Chinese President Xi is said to be disgruntled with Kim, signs of improvement in relations were seen when the former sent the latter a congratulatory message to mark the once-in-a-generation party congress.

Xi’s message was interpreted as his approval of Pyongyang’s decision not to conduct a fifth nuclear test, which many North Korea watchers thought was imminent before the party congress.

A basketball match between a North Korean team and the Chinese Olympic team in Pyongyang on Monday, which was attended by Kim Jong-un and his sister Kim Yo-jong, also suggested the alleviation of tensions between the two nations.

A source in Beijing with knowledge of China-North Korea relations said North Korea and China had been talking to arrange a meeting between Xi and the delegation today and added that Ri’s visit is a formal visit on behalf of the Workers’ Party.

“Ri is likely to meet Xi, as the whole point of his trip is to normalize relations with China,” said Kim Keun-sik, a professor of North Korean studies at Kyungnam University in Changwon, South Gyeongsang. Kim said Ri could propose a summit between Kim Jong-un and Xi, and may be delivering a letter from Kim proposing it.

“The visit is part of Pyongyang’s efforts to seek a way out of international sanctions.”