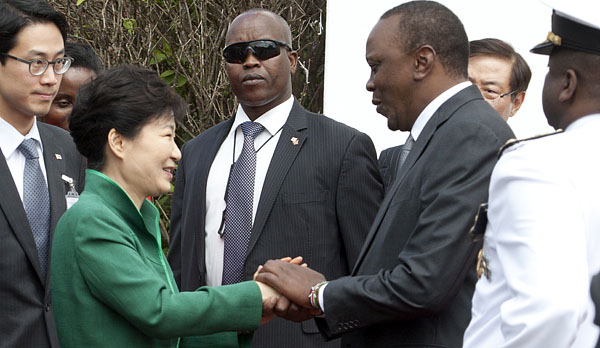 The two leaders share a bond as the two countries forged diplomatic relations in February 1964, during the administrations of their fathers, Kenya’s first president Kenyatta and former President Park Chung Hee. This came after Kenya was liberated from British colonial rule in 1963. The two former leaders both came into office in 1963. Kenyatta died in 1978 and Park the following year.

This marks the first state visit to Kenya by a South Korean president in 34 years. A total of 20 memoranda of understanding were signed during the meeting, including energy and power supply related deals that can enable the participation of Korean businesses in constructing geothermal power plants.

“Kenya plans to construct a 4,000-megawatt nuclear power plant by 2033,” a Blue House official said. “Sharing our nuclear plant construction and management experience can be a foothold to participating in this middle- and long-term nuclear plant project.”

Park, in an editorial piece published Monday by the Kenyan newspaper the Daily Nation, shared a story of a Korean wig-making company in Kenya in 1989 that eventually created 10,000 jobs. “Ruiru, where the company is located, used to be a town with a population of 15,000, but has been transformed into a vibrant industrial city,” she wrote, adding she intends to “renew the friendly relationship between our two countries” during her visit.

Park highlighted the importance of sustainable cooperation, collaboration in the information and communications technology fields, and enabling Korea’s creative economy initiative to aid in Kenya’s efforts to achieve its Vision 2030 developmental goals.

Park kicked off a three-country Africa tour on May 25, which also took her to Ethiopia and Uganda.

The president arrived in her final destination, Kenya, on Monday and held a meeting with overseas Koreans that evening. “Throughout this trip to Africa, I have held in my heart two words: “hope” and “challenge,” she told the gathering at a hotel in Nairobi. “The hope of an Africa that dreams of a better future, and the challenge of the Republic of Korea to achieve greater security and peace.”